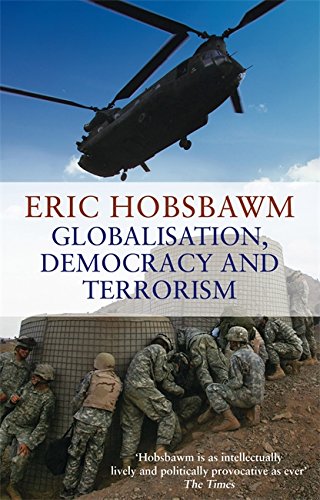 In Stock
18,49 $
inc. GST
An engaging and provocative survey of our current globalised world from one of Britain's foremost political historians.
Like New Very Good Good
Only 1 left

In this collection of illuminating, incisive and thought-provoking essays, Eric Hobsbawm examines every aspect of the issues that have inspired the greatest debate - not only among politicians, academics and commentators but among all of us - in recent years: that is, the effects of globalisation, the plight of democracy and the threat of terrorism. As we are only too aware, all of these have the power to affect our daily lives, from the state of our economies to the fear of murderous bomb attacks in our cities. Hobsbawm discusses war and peace in our lifetime, problems of public order, anarchy and terrorism, nationalism and the changing nature of the nation-state, and the future prospects for democracy, setting out the historical background and the lessons it can offer us. Above all, he turns his piercing gaze to the Middle East and Western imperialism.
Engaging, erudite and demonstrating his characteristically firm grasp of the facts and statistics, Hobsbawm's essays are indispensable to our understanding of the world we live in.

** 'Hobsbawm is as intellectually lively and politically provocative as ever in these lectures on the "barbarisation" of society through technology, economic activity and globalisation * THE TIMES *
** 'This collection of recent essays gives a good sense of the vigour and passion with which this famous intellectual surveys the contemporary world * SUNDAY TELEGRAPH *
** 'Britain's greatest living left-wing historian . . . GLOBALISATION, DEMOCRACY AND TERRORISM picks up where the bestselling AGE OF EXTREMES and THE NEW CENTURY left off * THE SCOTSMAN *
** 'Hobsbawm is one of the leading intellectual authors of the concepts and language in which all of us now discuss our situation. He sketches here with great lucidity and his usual effortless compression the new landscape of the 21st century * GUARDIAN *

Eric Hobsbawm was born in Alexandria in 1917 and educated in Vienna, Berlin, London and Cambridge. A distinguished historian, he is a Fellow of the British Academy and of the American Academy of Arts & Sciences, with honorary degrees from universities in several countries.

GOR009276883
Globalisation, Democracy And Terrorism by Eric Hobsbawm
Eric Hobsbawm
Used - Like New
Paperback
Little, Brown Book Group
2008-04-03
192
0349120668
9780349120669
N/A
Book picture is for illustrative purposes only, actual binding, cover or edition may vary.
The book has been read, but looks new. The book cover has no visible wear, and the dust jacket is included if applicable. No missing or damaged pages, no tears, possible very minimal creasing, no underlining or highlighting of text, and no writing in the margins.