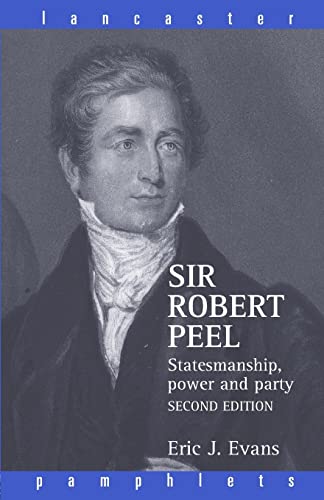 In Stock
$13.49
+10% GST
Provides an introduction to the life and career of Sir Robert Peel - one of the most important political leaders of the nineteenth century. This book assesses Peel's career, and includes a glossary of key terms, plus a bibliography.
Very Good Well Read
Only 1 left

Sir Robert Peel provides an accessible and concise introduction to the life and career of one of the most political leaders of the nineteenth century. Perhaps best known for seeing through the Repeal of the Corn Laws, Peel had an enormous impact on political life of his age and beyond. Eric J. Evans reassesses Peel's career, arguing that although Peel's executive and administrative strengths were great, his arrogance, lack of empathy with the development of political parties and his inflexible commitment to economic liberalism presented political problems which he was incapable of solving.

Sir Robert Peel is the perfect introduction for all students of nineteenth-century history.

'It is a pity that this excellent revised edition of Professor Evans' book will not be bought by Scottish History teachers, except those who have a personal rather than a curricular interest in Sir Robert Peel ... Evans is very accessible and gives an excellent overview of Peel.' - History Teaching Review

GOR001981782
Sir Robert Peel: Statesmanship, Power and Party by Eric J. Evans (Emeritus Professor, Lancaster University, UK)
Eric J. Evans (Emeritus Professor, Lancaster University, UK)
Lancaster Pamphlets
Used - Very Good
Paperback
Taylor & Francis Ltd
2006-03-06
128
041536616X
9780415366168
N/A
Book picture is for illustrative purposes only, actual binding, cover or edition may vary.
This is a used book - there is no escaping the fact it has been read by someone else and it will show signs of wear and previous use. Overall we expect it to be in very good condition, but if you are not entirely satisfied please get in touch with us.