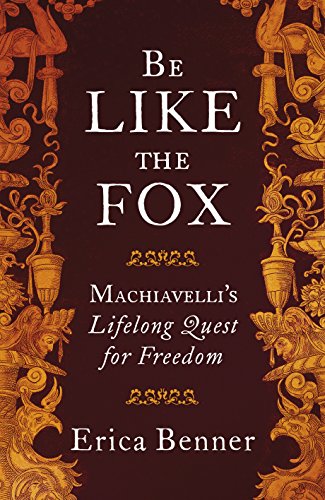 Be Like the Fox: Machiavelli's Lifelong Quest for Freedom by Erica Benner

GUARDIAN BOOKS OF THE YEAR 2017 LONGLISTED FOR THE HISTORICAL WRITERS' ASSOCIATION NON-FICTION CROWN 2017 'Lively, compulsively readable, fluently written and unshowily erudite' Guardian 'A gripping portrait of a brilliant political thinker, who understood the dangers of authoritarianism and looked for ways to curb them even though independent speech had become impossible' The New Yorker 'A ripping read . . . fascinating, charming, enjoyably unorthodox' Telegraph Niccolo Machiavelli lived in a fiercely competitive world, one where brute wealth, brazen liars and ruthless self-promoters seemed to carry off all the prizes; where the wealthy elite grew richer at the expense of their fellow citizens. In times like these, many looked to crusading religion to solve their problems, or they turned to a new breed of leaders - super-rich dynasties like the Medici or military strongmen like Cesare Borgia; upstarts from outside the old ruling classes. In the republic of Florence, Machiavelli and his contemporaries faced a choice: should they capitulate to these new princes, or fight to save the city's democratic freedoms? Be Like the Fox follows Machiavelli's dramatic quest for political and human freedom through his own eyes. Masterfully interweaving his words with those of his friends and enemies, Erica Benner breathes life into his penetrating, comical, often surprising comments on events. Far from the cynical henchman people think he was, Machiavelli emerges as his era's staunchest champion of liberty, a profound ethical thinker who refused to compromise his ideals to fit corrupt times. But he did sometimes have to mask his true convictions, becoming a great artist of fox-like dissimulation: a master of disguise in dangerous times.

Lively, compulsively readable, fluently written and unshowily erudite -- Terry Eagleton * Guardian *
Compelling, unconventional -- Julian Baggini * Financial Times *
A ripping read . . . fascinating, charming, enjoyably unorthodox -- Tim Smith-Laing * Telegraph *
A remarkable work of imaginative engagement backed by scholarly learning. . . can be read with pleasure by anyone interested in the craft of politics and the life of ideas. -- Edmund Fawcett * The New York Times *
Engaging, clever, entertaining . . . Benner brings to life a Machiavelli who's a man of considerable political principle . . . a creative, lively and very readable book with more than a little contemporary resonance. -- Catherine Fletcher * Literary Review *
A gripping portrait of a brilliant political thinker, who understood the dangers of authoritarianism and looked for ways to curb them even though independent speech had become impossible. * The New Yorker *
A rich, vivid and endlessly surprising portrayal of the man and his times -- Tracy Borman * BBC History Magazine *
Erica Benner succeeds brilliantly in overturning centuries-old received views of a seminal but misunderstood writer and thinker. Her enthralling and moving evocation of Machiavelli's turbulent career, set in the milieu in which he lived, also reveals how much he is our contemporary -- Rosamund Bartlett
Timely, dramatic . . . an eye-opening, captivating portrait. Benner succeeds at what every biographer tries to do: she brings her subject to life for her readers. * Kirkus *
A readable and excellent book . . . In our world of new princes and divided societies, with increasing confrontations that can seem in constant danger of escalating to conflict, Be Like the Fox reads like a cautionary call from the past -- General Sir Rupert Smith
Fascinating, remarkable . . . Erica Benner illuminates not only the life of Machiavelli but the complex and cruel political world in which he operate -- Avi Shlaim
Vividly drawn . . . biography at its best * Times Higher Education Supplement *
Enjoyably revisionist . . . Benner deserves great praise for dragging this much-maligned man's reputation at least partly out of the mud -- Andrew Lynch * Sunday Business Post *
A lively and engaging study told with empathy, passion and imagination . . . well-researched, forceful and thought-provoking -- Historical Writers' Association

Erica Benner lives in Berlin. She is the author of several books, including Machiavelli's Ethics and Machiavelli's Prince: A New Reading. A former fellow in Political Philosophy at Yale, she taught for many years at Oxford University and the London School of Economics.

GOR008236279
Be Like the Fox: Machiavelli's Lifelong Quest for Freedom by Erica Benner
Erica Benner
Used - Very Good
Hardback
Penguin Books Ltd
2017-03-02
384
1846147077
9781846147074
N/A
Book picture is for illustrative purposes only, actual binding, cover or edition may vary.
This is a used book - there is no escaping the fact it has been read by someone else and it will show signs of wear and previous use. Overall we expect it to be in very good condition, but if you are not entirely satisfied please get in touch with us.