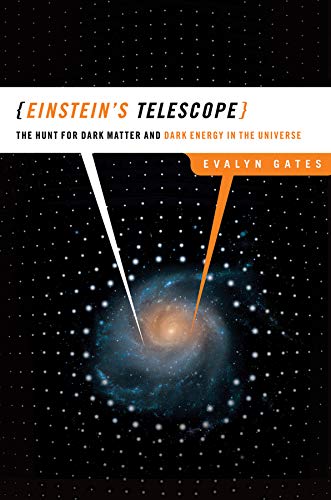 Einstein's Telescope: The Hunt for Dark Matter and Dark Energy in the Universe by Evalyn Gates

Dark energy. Dark matter. These strange and invisible substances don't just sound mysterious: their unexpected appearance in the cosmic census is upending long-held notions about the nature of the Universe. Astronomers have long known that the Universe is expanding, but everything they could see indicated that gravity should be slowing this spread. Instead, it appears that the Universe is accelerating its expansion and that something stronger than gravity--dark energy--is at work. In Einstein's Telescope Evalyn Gates, a University of Chicago astrophysicist, transports us to the edge of contemporary science to explore the revolutionary tool that unlocks the secrets of these little-understood cosmic constituents. Based on Einstein's theory of general relativity, gravitational lensing, or "Einstein's Telescope," is enabling new discoveries that are taking us toward the next revolution in scientific thinking--one that may change forever our notions of where the Universe came from and where it is going.

"[...] Gates' guide to this frontier, supplemented by beautiful astronomical photographs and instructive illustrations, will be as exciting as it is informative to her readers." -- Gilbert Taylor - Booklist
"Starred Review. An enthusiastic update on the search for the materials that make up the universe." -- Kirkus Reviews
"[...] Gates writes with a freshness and clarity that make complex ides such as relativity, lensing, black holes, and the cosmic web understandable. Highly recommended for public and academic libraries of all sizes." -- Denise Dayton - Library Journal
"Cogent review of this intriguing topic." -- Marcia Bartusiak - Washington Post

Evalyn Gates is the assistant director of the Kavli Institute for Cosmological Physics, a senior research associate at the University of Chicago, and the former astronomy director of the Adler Planetarium. Her writing has appeared in Physics Today and the Chicago Tribune.

GOR006052482
Einstein's Telescope: The Hunt for Dark Matter and Dark Energy in the Universe by Evalyn Gates
Evalyn Gates
Used - Very Good
Hardback
WW Norton & Co
2009-02-23
320
0393062384
9780393062380
N/A
Book picture is for illustrative purposes only, actual binding, cover or edition may vary.
This is a used book - there is no escaping the fact it has been read by someone else and it will show signs of wear and previous use. Overall we expect it to be in very good condition, but if you are not entirely satisfied please get in touch with us.