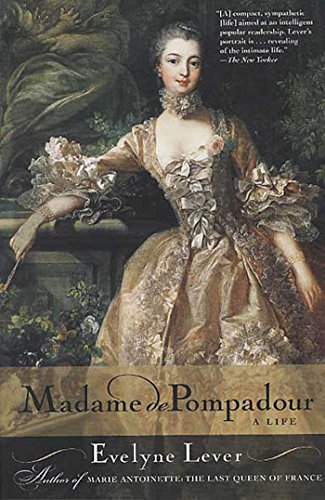 When Jeanne Antoinette Poisson was a child, a fortune-teller predicted that she would one day be the mistress of a king. Born into the financial bourgeoisie that was a world apart from the royal court, the beautiful Jeanne Antoinette nonetheless fulfilled this prophecy by becoming Madame de Pompadour, the most famous and influential mistress of Louis XV. In this sumptuous biography, Evelyne Lever traces the enduring friendship between the monarch and his favorite, and the far-reaching implications-both personal and political-of their relationship.

Pompadour was devoted to Louis XV, and her contribution to the culture of the age was significant: she was an outstanding singer and actress, entertaining the King and the court in impressive stage productions, and was a longtime patron of the visual arts. She commissioned paintings by Boucher, Nattier, Van Loo, La Tour, and Pigalle, and she formed friendships with many of the philosophers and writers of the period, including Fontenelle, Crebillon, and Voltaire. In effect, she was France's minister of culture at a time when no such position existed. But she was loathed for her role in France's disastrous military losses, and was the victim of persistent court gossip and intrigues.

This vibrant biography sheds new light on the talented and resilient woman who influenced, for better and worse, the fate of a nation.

"Though bodices are ripped at the outset, French historian and biographer Lever (Marie Antoinette, not reviewed) settles down to offer an astute portrait of Madame de Pompadour in the court of Louis XV." - Kirkus Reviews

Evelyne Lever is a leading French historian. Marie Antoinette is her first book to be published in the United States. She lives in Paris with her husband, Maurice Lever, the author of Sade.

GOR002748818
Madame de Pompadour: A Life by Evelyne Lever
Evelyne Lever
Used - Very Good
Paperback
St Martin's Press
2008-07-17
320
0312310501
9780312310509
N/A
Book picture is for illustrative purposes only, actual binding, cover or edition may vary.
This is a used book - there is no escaping the fact it has been read by someone else and it will show signs of wear and previous use. Overall we expect it to be in very good condition, but if you are not entirely satisfied please get in touch with us.