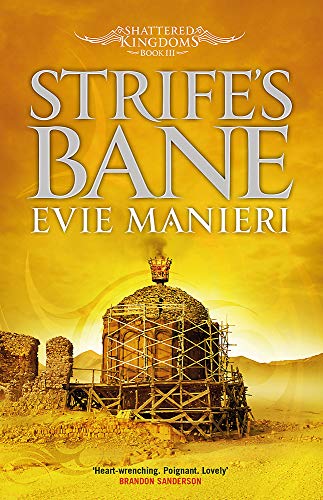 In Stock
$26.99
inc. GST
Brandon Sanderson said, 'I loved these characters, even though I knew it was going to hurt. Heart-wrenching. Poignant. Lovely.' Now the Shadari and Norlanders have more heartache to face in the climax of The Shattered Kingdoms.
Very Good
Only 1 left

'I loved these characters, even though I knew it was going to hurt. Heart-wrenching. Poignant. Lovely' - Brandon Sanderson

The final instalment of the heart-breaking Shattered Kingdoms series.

In the south, the Shadari rebels have thrown off their Norlander oppressors and are struggling to rebuild their desert kingdom - but King Daryan is about to discover a secret cabal that has been working against everything he is trying to do.

Lahlil Eotan has left her great victory in Norland behind her in the hopes of reuniting with King Jachad of the Nomas - before his transformation into a god separates them for ever. But somehow she's acquired a travelling companion in the form of one Rho Arregador, who won't let her forget her role in the Shadar's predicament or in her sister Isa's chilling transformation.

But Daryan is facing more than treachery and plague: an ancient enemy with unimaginable powers is sailing towards him, determined to claim his country and his people as her own.

'Inventive . . . absorbing and rewarding' - Kirkus on The Shattered Kingdoms

I loved these characters, even though I knew it was going to hurt. Heart-wrenching. Poignant. Lovely * Brandon Sanderson on Blood's Pride *
Inventive . . . absorbing and rewarding * Kirkus on The Shattered Kingdoms *
The suspense, character development, and worldbuilding are all superior, and the ominous tone of the opening is sustained throughout * Publisher's Weekly on The Shattered Kingdoms *
Superb * Tor.com on Blood's Pride *
Intrigue, betrayal and old rivalries play out against the fires of revolution. Hang on for a wild ride! * Gail Z. Martin, author of Chronicles of the Necomancer on The Shattered Kingdoms *
A remarkable feat for a newcomer, and leaves me eager for the sequel, Fortune's Blight * Locus on Blood's Pride *
Her ability to insert beautiful descriptions into an action-packed scene is certainly the mark of a talented writer and the series only looks set to become more exciting as the story progresses. * British Fantasy Society on Blood's Pride *
Picture the fluent prose and flawless world-building of an author such as Trudi Canavan combined with the epic plot and character lists of an author like Martin and you won't be far off . . . Her ability to contrast beauty with brutality, hope with despair and love with hate will secure this novel as one of the year's finest * Fantasy-Faction on The Shattered Kingdoms *

Evie Manieri graduated from Wesleyan University with a degree in Mediaeval History and Theatre - disciplines that continue to influence her work in equal measure. Evie lives with her family in New York and in her spare time she can be found singing soprano with New York's Renaissance Street Singers.

GOR010000841
Strife's Bane: Shattered Kingdoms: Book 3 by Evie Manieri
Evie Manieri
Shattered Kingdoms
Used - Very Good
Paperback
Quercus Publishing
2019-02-21
384
0857389521
9780857389527
N/A
Book picture is for illustrative purposes only, actual binding, cover or edition may vary.
This is a used book - there is no escaping the fact it has been read by someone else and it will show signs of wear and previous use. Overall we expect it to be in very good condition, but if you are not entirely satisfied please get in touch with us.