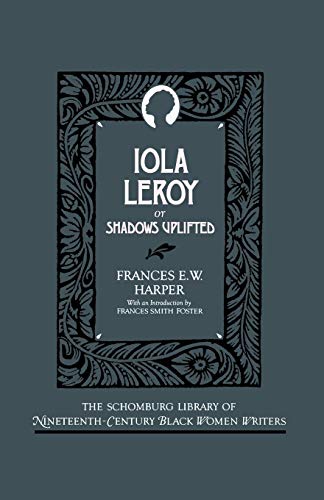 The Schomburg Library of Nineteenth-Century Black Women Writers General Editor: HENRY LOUIS GATES, JR. The past two decades have seen a dramatic resurgence of interest in black women writers, as authors such as Toni Morrison and Alice Walker have come to dominate the larger African-American literary landscape. Yet the works of the writers who founded and nurtured the black women's literary tradition-nineteenth-century African-American women-have remained buried in research libraries or in expensive hard-to-find reprints, often inaccessible to twentieth-century readers. Oxford University Press, in collaboration with the Schomburg Center for Research in Black Culture, a research unit of The New York Public Library, rescued the voice of an entire segment of the black tradition by offering thirty volumes of these compelling and rare works of fiction, poetry, autobiography, biography, essays, and journalism. Responding to the wide recognition this series has received, Oxford now presents four more of these volumes in paperback (to add to the four already available). Each book contains an introduction written by an expert in the field, as well as an overview by Henry Louis Gates, Jr., the General Editor.

A most useful novel by which to teach the conflicts surrounding race and gender in the nineteenth century. * Leonard Cassuto, Fordham University *
Well worth including. I found it to be a wonderful addition * virtually all students responded well to it...sparked interesting, charged debates. *
Probably the best-selling novel by an African-American before the twentieth century. * The New York Times *
For all its heavy-handed moralizing, [Iola Leroy] purposefully fought the prevailing negative views about blacks. * Essence *
Clearly Harper's words prove her awareness of the cultural and political functions of narrative. With its intricate plot, about a mulatto who first assumes she is white, subsequently learns she is the daughter of a slave ('the child follows the condition of its mother') and is therefore black, and who ultimately makes the conscious choice not to pass for white but to live as a black woman, Iola Leroy is a novel filled with the complexities and contradictions of black-and-female existence in America in the nineteenth century. While the success of the novel is indisputable in terms of copies sold, what is harder to measure is the extent to which it altered cultural and racial attitudes. * The Women's Review of Books *
Splendid novel, broad and useful portrait of society during reconstruction from the black point of view. * Leonard Cassuto, Fordham University, Lincoln Center *
Praise for the series:
What an astonishing gift...the collection is! * Alice Walker *
The collaboration among The Schomburg Center, Oxford University Press, and these exceptional scholars is an extraordinary event...but the collection is a spectacular achievement. * Toni Morrison *
In an editorial feat of epic proportions, Henry Louis Gates, Jr. has rescued the vast writings of nineteenth-century black women from oblivion....He has reinstated black literary ancestresses to their positions of prominence....Groundbreaking. * Marcellus Blount, The Village Voice Literary Supplement *
A literary treasure-chest....A collection we will have to turn to again and again. * The Women's Review of Books *
[With] The Schomburg Library, I feel as if I were watching a gigantic ebony figure being unearthed. It is a woman writing. * The Washington Post Book World *

GOR009271276
Iola Leroy: Or Shadows Uplifted by Frances E.W. Harper
Frances E.W. Harper
The Schomburg Library of Nineteenth-Century Black Women Writers
Used - Very Good
Paperback
Oxford University Press Inc
1990-07-12
336
0195063244
9780195063240
N/A
Book picture is for illustrative purposes only, actual binding, cover or edition may vary.
This is a used book - there is no escaping the fact it has been read by someone else and it will show signs of wear and previous use. Overall we expect it to be in very good condition, but if you are not entirely satisfied please get in touch with us.