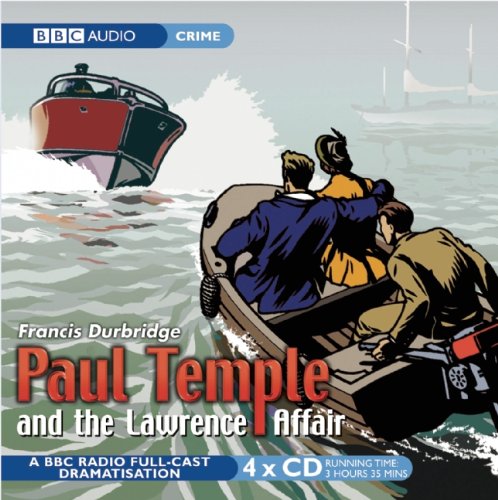 Paul Temple And The Lawrence Affair
by Francis Durbridge

For thirty years the fictional crime novelist and detective Paul Temple, together with his Fleet Street journalist wife Steve, solved case after case in one of BBC Radio's most popular series.

Paul Temple And The Lawrence Affair by Francis Durbridge

For thirty years the fictional crime novelist and detective Paul Temple, together with his Fleet Street journalist wife Steve, solved case after case in one of BBC Radio's most popular series. They inhabited a sophisticated world of chilled cocktails and fast cars, a world where Sir Graham Forbes, of Scotland Yard, usually needed Paul's help with his latest tricky case. Whilst she and Paul are staying in the fishing village of Downburgh, Steve gets the uneasy feeling that she is being watched by a man at Fisherman's Point. A pleasant boat trip turns into a nightmare when their craft gets shot at - and the boatman himself is later discovered drowned at sea. Back in London, the daughter of the head of CI5 has disappeared, and Sir Graham brings the matter to Paul's attention. Could there be a connection between this and the events in Downburgh?

Francis Durbridge was born in Hull in on 25 November 1912. He was educated in Bradford and went on to Birmingham University. It was while he was there that his radio play, Persuasion, was written and broadcast. After leaving university he worked for a short time in a stockbroker's office before realising that the only career he was really interested in was writing. For some time he toyed with the idea of creating a detective who was also a crime novelist, but was unable to finalise the character to his satisfaction until 1938. The end result, Paul Temple, inhabited a world of luxurious sports cars, Knightsbridge flats and chic women - a bygone age of elegance and manners. Durbridge had his first detective novel published at the age of twenty-two and went on to write three dozen more. Paul Temple made his first radio appearance on 8 April 1938 on the BBC's Midland Region. Send for Paul Temple was a huge success: within a week of the serial's final instalment the BBC received 7000 letters demanding more. A second adventure, Paul Temple and the Front Page Men, was broadcast in November and December 1938 and was even more popular than the first. The theme tune for the series was Vivian Ellis' Coronation Scot, which became instantly recognisable to the millions of Temple listeners. In all, twenty-one series of Paul Temple were broadcast over a period of thirty years. During the 1950s and '60s Durbridge transferred his skills to television; Portrait of Alison, Melissa and The Scarf are just a few of the serials that gripped the nation during those years. They all adhered to the writer's golden formula: 'Everybody is lying, nothing is as it seems.' His appeal was widespread: in Germany in particular a new Durbridge television thriller was apparently enough to clear the cinemas. In 1967 the European Broadcasting Union commissioned him to create a radio serial for the international market. The result, La Boutique, made for riveting listening. Durbridge was an extremely entertaining writer and the clever twists and turns of his plots were guaranteed to keep audiences tuning in week after week. He also wrote nine plays for the theatre: Suddenly at Home, The Gentle Hook, House Guest and A Touch of Danger all ran successfully in the West End. He married Norah Lawley in 1940 and had two sons. Francis Durbridge died in London on 10 April 1998.

GOR005772278
Paul Temple And The Lawrence Affair by Francis Durbridge
Francis Durbridge
Used - Very Good
Hardback
BBC Audio, A Division Of Random House
2003-05-05
0563494115
9780563494119
N/A
Book picture is for illustrative purposes only, actual binding, cover or edition may vary.
This is a used book - there is no escaping the fact it has been read by someone else and it will show signs of wear and previous use. Overall we expect it to be in very good condition, but if you are not entirely satisfied please get in touch with us.