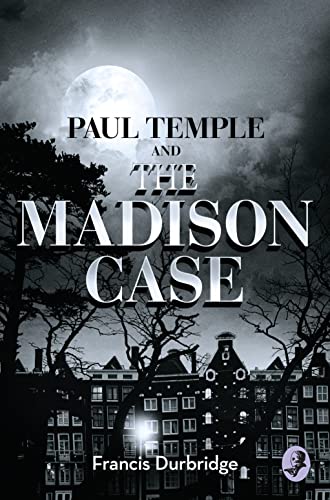 Paul Temple and the Madison Case
by Francis Durbridge

Paul and Steve plan to relax and take in some fresh sea air on board a luxurious trans-Atlantic liner ... that is until they meet the elusive Sam Portland. After the innocent introduction, grave danger lies ahead for the couple.

Paul and Steve plan to relax and take in some fresh sea air on board a luxurious trans-Atlantic liner ... that is until they meet the elusive Sam Portland. After the innocent introduction, grave danger lies ahead for the couple.

As events unfold, a concoction of murder, blackmail and terror ensues. Life on board the ship requires cruise control as Temple attempts to get to the bottom of the secret behind Sam's lost years ... And just who is Madison?

GOR007700927
Paul Temple and the Madison Case (A Paul Temple Mystery) by Francis Durbridge
Francis Durbridge
A Paul Temple Mystery
Used - Very Good
Paperback
HarperCollins Publishers
2015-12-03
212
0008125783
9780008125783
N/A
Book picture is for illustrative purposes only, actual binding, cover or edition may vary.
This is a used book - there is no escaping the fact it has been read by someone else and it will show signs of wear and previous use. Overall we expect it to be in very good condition, but if you are not entirely satisfied please get in touch with us.