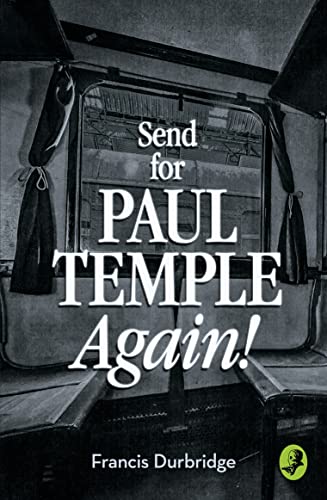 Actress Norma Rice is found dead on a train, and the letters REX are scrawled in red chalk on her compartment window. It is the third death to occur in a mysterious string of murders and Scotland Yard are compelled to send once again for Paul Temple.

Actress Norma Rice is found dead on a train, and the letters REX are scrawled in red chalk on her compartment window. It is the third death to occur in a mysterious string of murders and Scotland Yard are compelled to send once again for Paul Temple.

Temple, now acting as an investigator as well as a mystery novelist, is joined by his wife Steve as they are embroiled in this latest mystery. As they convene to discuss the case with the Yard's Sir Graham Forbes at a nightclub, they witness one of the performers die in the middle of her act before they have a chance to speak to her. Can Steve and Paul unmask 'Rex' before they strike again?

GOR007129161
Send for Paul Temple Again! (A Paul Temple Mystery) by Francis Durbridge
Francis Durbridge
A Paul Temple Mystery
Used - Very Good
Paperback
HarperCollins Publishers
2015-08-13
286
0008125643
9780008125646
N/A
Book picture is for illustrative purposes only, actual binding, cover or edition may vary.
This is a used book - there is no escaping the fact it has been read by someone else and it will show signs of wear and previous use. Overall we expect it to be in very good condition, but if you are not entirely satisfied please get in touch with us.