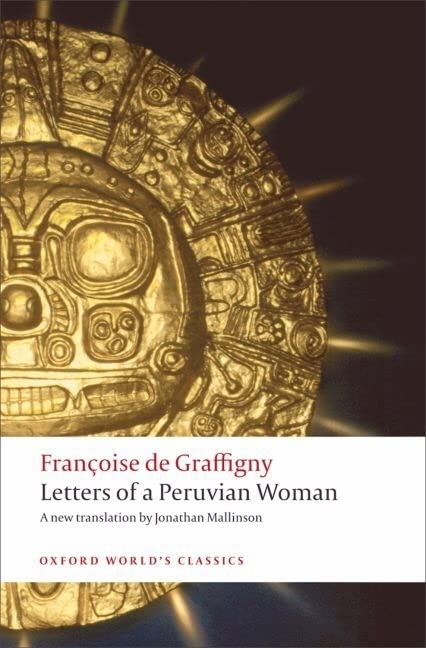 Letters of a Peruvian Woman
by Francoise de Graffigny

Out of Stock
$17.49
inc. GST
Graffigny's bold and original novel tells the story of Zilia, an Inca Virgin, rescued from the Spanish and brought to France. Separated from her lover and her culture, she recounts her experiences and personal growth. To this fine new translation are appended extracts from Graffigny's chief source and other writers' fictional responses.
Very Good
Only 0 left

Letters of a Peruvian Woman Summary

Letters of a Peruvian Woman by Francoise de Graffigny

'It has taken me a long time, my dearest Aza, to fathom the cause of that contempt in which women are held in this country ...' Zilia, an Inca Virgin of the Sun, is captured by the Spanish conquistadores and brutally separated from her lover, Aza. She is rescued and taken to France by Deterville, a nobleman, who is soon captivated by her. One of the most popular novels of the eighteenth century, the Letters of a Peruvian Woman recounts Zilia's feelings on her separation from both her lover and her culture, and her experience of a new and alien society. Francoise de Graffigny's bold and innovative novel clearly appealed to the contemporary taste for the exotic and the timeless appetite for love stories. But by fusing sentimental fiction and social commentary, she also created a new kind of heroine, defined by her intellect as much as her feelings. The novel's controversial ending calls into question traditional assumptions about the role of women both in fiction and society, and about what constitutes 'civilization'. ABOUT THE SERIES: For over 100 years Oxford World's Classics has made available the widest range of literature from around the globe. Each affordable volume reflects Oxford's commitment to scholarship, providing the most accurate text plus a wealth of other valuable features, including expert introductions by leading authorities, helpful notes to clarify the text, up-to-date bibliographies for further study, and much more.

Letters of a Peruvian Woman Reviews

Jonathan Mallinson is Lecturer in French at the University of Oxford, and Fellow of Trinity College.

GOR005260460
Letters of a Peruvian Woman by Francoise de Graffigny
Francoise de Graffigny
Oxford World's Classics
Used - Very Good
Paperback
Oxford University Press
2009-01-01
208
0199208174
9780199208173
N/A
Book picture is for illustrative purposes only, actual binding, cover or edition may vary.
This is a used book - there is no escaping the fact it has been read by someone else and it will show signs of wear and previous use. Overall we expect it to be in very good condition, but if you are not entirely satisfied please get in touch with us.