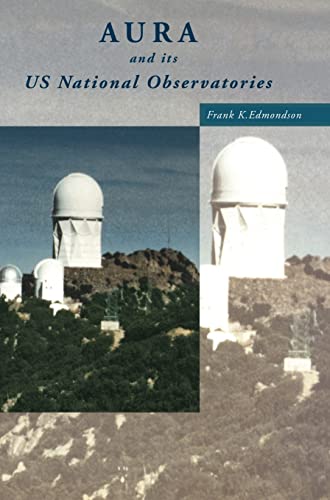 AURA and its US National Observatories
by Frank K. Edmondson (Indiana University)

In Stock
$34,99
inc. GST
In this 1997 book, the history of the Kitt Peak National Observatory (KPNO) and the Cerro Tololo Inter-American Observatory (CTIO) following the Second World War is explained from the unique perspective of Frank K. Edmondson, former member of the AURA board of directors.
Very Good
Only 1 left

AURA and its US National Observatories Summary

AURA and its US National Observatories by Frank K. Edmondson (Indiana University)

A new source of funding for astronomy stemmed from the creation of the National Science Foundation (NSF) in 1950. Astronomers were quick to take advantage of the opportunities this provided to found new observatories. In this 1997 book, the science and politics of the establishment, funding, construction and operation of the Kitt Peak National Observatory (KPNO) and the Cerro Tololo Inter-American Observatory (CTIO) by the Association of Universities for Research in Astronomy (AURA) are seen from the unique perspective of Frank K. Edmondson, a former member of the AURA board of directors. AURA was asked to manage the Sacramento Peak Observatory (SPO) in 1976, and in 1983 the National Solar Observatory (NSO) was formed by merging the SPO and the KPNO solar programs. In 1981 NASA chose AURA to establish and operate the Space Telescope Science Institute (STScI). This is a personal account of a period of major innovation in American optical astronomy.

AURA and its US National Observatories Reviews

' ... this is an important document ... major libraries should have a copy.' David Stickland, The Observatory
' ... the work is one of substantial archival scholarship. There is a superb story here and someone will tell it ... ' Jasper Wall, Astronomy Now
'Frank Edmundson's book ... is well worth reading. The pioneers of the 1950s have left us a great legacy. It should be cherished and enhanced.' Geoffrey Burbidge, Astronomy and Geophysics
'We may surmise that, in the eyes of twenty-first-century historians of astronomy, twentieth-century astronomers have done well. They will be particularly grateful to Frank Edmondson for this outstanding contribution on the US national observatories. Adriaan Blaauw, Journal of History and Astronomy
"The reporting is clear, accurate, and detailed, with ample documentation....its intellectual content and in its social practice....Edmondson has done well what he set out to do and his legacy of information and insight will assist less prudent historians in their speculations." Historical Studies in the Physics and Biological Sciences
"As it contains a great deal of previously unpublished material, this book will be invaluable to anyone trying to understand the history of American optical astronomy since the war. ...this is a unique book that will be of great interest to historians of postwar American astronomy...." David Leverington, Isis

GOR010749593
AURA and its US National Observatories by Frank K. Edmondson (Indiana University)
Frank K. Edmondson (Indiana University)
Used - Very Good
Hardback
Cambridge University Press
1997-03-06
386
0521553458
9780521553452
N/A
Book picture is for illustrative purposes only, actual binding, cover or edition may vary.
This is a used book - there is no escaping the fact it has been read by someone else and it will show signs of wear and previous use. Overall we expect it to be in very good condition, but if you are not entirely satisfied please get in touch with us.