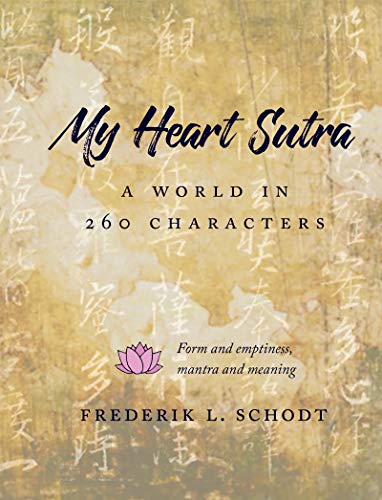 : A cultural and personal journey into the famous sutra that teaches "form is emptiness; and emptiness is form."

My Heart Sutra: A World in 260 Characters by Frederik L. Schodt

The Heart Sutra is the most widely read, chanted, and copied text in East Asian Buddhism. Here Frederik L. Schodt explores his lifelong fascination with the sutra: its mesmerizing mantra, its ancient history, the "emptiness theory, and the way it is used around the world as a metaphysical tool to overcome chaos and confusion and reach a new understanding of reality--a perfection of wisdom. Schodt's journey takes him to caves in China, American beats declaiming poetry, speculations into the sutra's true origins, and even a robot Avalokitesvara at a Kyoto temple.

Fluent in Japanese, Frederik L. Schodt is an author and translator of impressive breadth. He has written extensively on Japanese pop culture, technology, and history. His books include Dreamland Japan, America and the Four Japans, and Native American in the Land of the Shogun, which was a Choice Magazine Outstanding Academic Title in 2005. In 1998, Schodt translated and annotated Japanese immigrant Henry Kiyama's The Four Immigrants Manga, one of the first American original comic books; graphic novelist Will Eisner called the book "a treasure [that] belongs in every library."

In 2009, Schodt was awarded the prestigious Order of the Rising Sun, Gold Rays with Rosette, by the Japanese emperor for his contribution "to the introduction and promotion of Japanese contemporary popular culture in the United States of America. He is also a recipient of the Japan Foundation Award for 2017.

How I Met the Mantra

The Metaphysical Can Opener

New Life in a New World