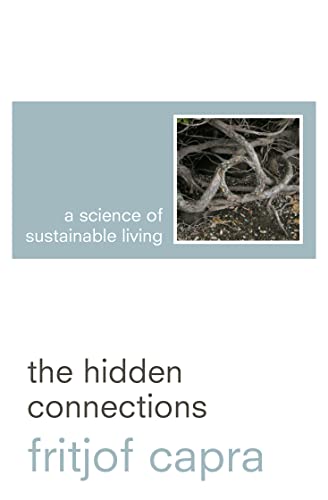 The Hidden Connections by Fritjof Capra

A fierce attack on globalism - and a manifesto for change - by one of the world's leading scientific writers.

The Hidden Connections: A Science for Sustainable Living by Fritjof Capra

A fierce attack on globalism - and a manifesto for change - by one of the world's leading scientific writers.

Recent scientific discoveries indicate that all life - from the most primitive cells, up to human societies, corporations and nation-states, even the global economy - is organised along the same basic patterns and principles: those of the network.

However, the new global economy differs in important aspects from the networks of life: whereas everything in a living network has a function, globalism ignores all that cannot give it an immediate profit, creating great armies of the excluded. The global financial network also relies on advanced information technologies - it is shaped by machines, and the resulting economic, social and cultural environment is not life-enhancing but life-degrading, in both a social and an ecological sense.

Capra demonstrates conclusively how tightly humans are connected with the fabric of life and makes it clear that it is imperative to organise the world according to a different set of values and beliefs, not only for the well-being of human organisations, but for the survival and sustainability of humanity as a whole.

Capra received his PhD in theoretical physics from the University of Vienna and has done research in high-energy physics at several European and American universities. He has written and lectured extensively about the philosophical implications of modern science and is the author of The Tao of Physics, The Turning Point, Uncommon Wisdom and The Web of Life. Currently Director of the Center for Ecoliteracy in Berkeley, California, he lives in Berkeley with his wife and daughter.

GOR001537453
9780006551584
0006551580
The Hidden Connections: A Science for Sustainable Living by Fritjof Capra
Fritjof Capra
Used - Very Good
Paperback
HarperCollins Publishers
2003-03-03
320
N/A
Book picture is for illustrative purposes only, actual binding, cover or edition may vary.
This is a used book - there is no escaping the fact it has been read by someone else and it will show signs of wear and previous use. Overall we expect it to be in very good condition, but if you are not entirely satisfied please get in touch with us
Trustpilot