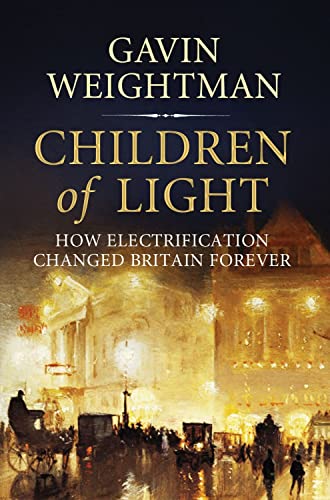 Children of Light
by Gavin Weightman

Used Price
$28.99
inc. GST
Free Shipping in Australia
Vivid in its execution and original in its argument, this book tells the story of how the discovery of electricity changed Britain forever.
Very Good Good

In the early 1870s a night-time view over Britain would have revealed towns lit by the warm glow of gas and oil lamps and a much darker countryside, the only light emanating from the fiery sparks of late running steam trains. However, by the end of this same decade that Victorian Britons would experience a new brilliance in their streets, town halls and other public places. Electricity had come to town.

In Children of Light, Gavin Weightman brings to life not just the most celebrated electrical pioneers, such as Thomas Edison, but also the men such as Rookes Crompton who lit Henley Regatta in 1879; Sebastian Ziani de Ferranti, a direct descendant of one of the Venetian Doges, who built Britain's first major power station on the Thames at Deptford; and Anglo-Irish aristocrat, Charles Parsons inventor of the steam turbine, which revolutionised the generating of electricity.

Children of Light takes in the electrification of the tramways and the London Underground, the transformation of the home with 'labour saving' devices, the vital modernising of industry during two world wars, and the battles between environmentalists and the promoters of electric power, which began in earnest when the first pylons went up. As Children of Light shows, the electric revolution has brought us luxury that would have astonished the Victorians, but at a price we are still having to pay.

Gavin Weightman is a social historian based in London. His books include the bestselling London River: A History of the Thames; The Frozen Water Trade; Signor Marconi's Magic Box; and most recently The Industrial Revolutionaries.

GOR002903930
Children of Light: How Electricity Changed Britain Forever by Gavin Weightman
Gavin Weightman
Used - Very Good
Hardback
Atlantic Books
2011-01-01
304
1848871171
9781848871175
N/A
Book picture is for illustrative purposes only, actual binding, cover or edition may vary.
This is a used book - there is no escaping the fact it has been read by someone else and it will show signs of wear and previous use. Overall we expect it to be in very good condition, but if you are not entirely satisfied please get in touch with us.