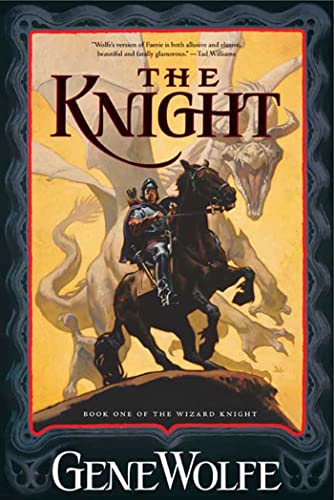 Used Price
$30.99
inc. GST
Free Shipping in Australia
Drawn from the real world into a magical realm of seven worlds, a teenager finds himself in the body of a mature warrior of heroic proportions and embarks on a perilous quest to find his destined sword and become a knight, encountering romance, danger, magic, and adventure along the way, in the first volume of a new fantasy series.
Reviews:
Trustpilot
Very Good

Knight: Book One Of The Wizard Knight by Gene Wolfe

A teenage boy passes from our world to a magical realm of seven worlds, where he is soon given the body of a mature man of heroic proportions. Forced to act as a man, inside he remains a boy - even as he sets off to find his destined sword and become a knight. His quest is filled with danger and adventure, giants, elves, dragons and a literally enchanted romance.

"The Knight is astonishing: deep, involving, humane, and absolutely original. This is the start of something big." --Michael Swanwick

"Great fiction flows from Gene Wolfe as from a fountain under high pressure. The Knight is his latest superb novel, non-stop action of a surreal majesty. By the time he's done, knights and wizards will never seem the same." --Kim Stanley Robinson

"A grand adventure that combines classic elements with a fresh, highly imaginative approach. I can't wait to read the next book." --Brian Herbert

"Sir Able of the High Heart is unlike any other hero, part Candide and part Conan the Barbarian, and the worlds in which he travels are also appropriately unique. Most writers of the fantastic do their best to create magical lands. Gene Wolfe actually knows how to cross over and -- luckily for us -- invites us to come along with him. Wolfe's version of Faerie is both allusive and elusive, beautiful and fatally glamorous." --Tad Williams

"An absorbing meditation on honor and manhood that's not only Wolfe at his literate best, but romantic, charming, and exciting to boot." --Delia Sherman

"It took me about a page and a quarter to completely enter the world Wolfe creates in The Knight. Having arrived, I believe I'll spend the rest of my life here." --Steven Brust

"[Gene Wolfe] was producing fiction of immense, Nabokovian rigor and complexity thirty years ago. The Knight proves he still is." --Peter Straub

"Gene Wolfe is the smartest, subtlest, most dangerous writer alive today, in genre or out of it. If you don't read this book you'll have missed out on something important and wonderful and all the cool people will laugh at you." --Neil Gaiman

"Gene Wolfe's The Knight. . . breaks like a thunderclap over the safe suburban sprawl of franchise fantasy. This is the real thing, boys and girls. Are you ready? It will scare the daylights out of you, take your breath away, make you laugh aloud and give you honest-to-goodness tears. You will devour it and discover just how hungry you have been." --Patrick O'Leary, author of The Impossible Bird

Gene Wolfe (1931-2019) was the Nebula Award-winning author of The Book of the New Sun tetralogy in the Solar Cycle, as well as the World Fantasy Award winners The Shadow of the Torturer and Soldier of Sidon. He was also a prolific writer of distinguished short fiction, which has been collected in such award-winning volumes as Storeys from the Old Hotel and The Best of Gene Wolfe.

A recipient of the World Fantasy Award for Life Achievement, the Edward E. Smith Memorial Award, and six Locus Awards, among many other honors, Wolfe was inducted into the Science Fiction Hall of Fame in 2007, and named Grand Master by the Science Fiction and Fantasy Writers of America in 2012.

GOR004086374
Knight: Book One Of The Wizard Knight by Gene Wolfe
Gene Wolfe
Wizard Knight S.
Used - Very Good
Paperback
St Martin's Press
2005-02-21
432
0765313480
9780765313485
N/A
Book picture is for illustrative purposes only, actual binding, cover or edition may vary.
This is a used book - there is no escaping the fact it has been read by someone else and it will show signs of wear and previous use. Overall we expect it to be in very good condition, but if you are not entirely satisfied please get in touch with us.