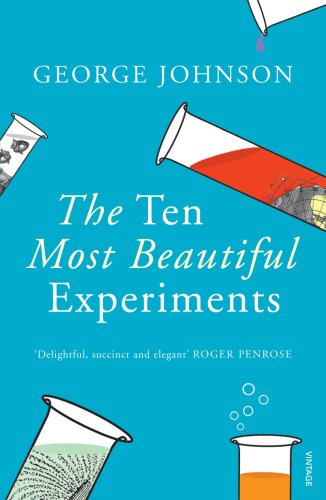 The Ten Most Beautiful Experiments
by George Johnson

In Stock
$10.99
+10% GST
Tells the stories of ten beautiful experiments which changed the world.
Very Good Good
5 in stock

The Ten Most Beautiful Experiments Summary

The Ten Most Beautiful Experiments by George Johnson

George Johnson tells the stories of ten beautiful experiments which changed the world. From Galileo singing to mark time as he measured the pull of gravity and Newton carefully inserting a needle behind his own eye, to Joule packing a thermometer on his honeymoon to take the temperature of waterfalls and Michelson recovering from a dark depression to discover that light moves at the same speed in every direction - these ten dedicated men employed diamonds, dogs, frogs and even their own bodies as they worked to discover the laws of nature and of the universe.

The Ten Most Beautiful Experiments Reviews

"Entertaining, finely crafted... there is a feast of fine science writing in this gem of a book" * Sunday Telegraph *
"Johnson's essays balance human interest and scientific wonder in equal measure, making for a delicious succession of vignettes" * Guardian *
"Johnson's lively book... finds beauty throughout science - even among dead frogs and drooling dogs" * Scotsman *
"Johnson manages to convey the heart-stopping wonder of discovery" * Radio 4, Today programme *
"In describing these beautifully simple works of genius, Johnson reveals as much about the corporatist nature of modern science as he does about early research" * Scotland on Sunday *

George Johnson is a science-writer for the New York Times and has also had work published in Scientific America, Time, Slate and Wired and in the collections The Best American Scientific Writing. His blog, The Cancer Chronicles, can be found at www.santafereview.com/chronicle

GOR001406365
The Ten Most Beautiful Experiments by George Johnson
George Johnson
Used - Very Good
Paperback
Vintage Publishing
2009-05-07
208
0099464586
9780099464587
N/A
Book picture is for illustrative purposes only, actual binding, cover or edition may vary.
This is a used book - there is no escaping the fact it has been read by someone else and it will show signs of wear and previous use. Overall we expect it to be in very good condition, but if you are not entirely satisfied please get in touch with us.