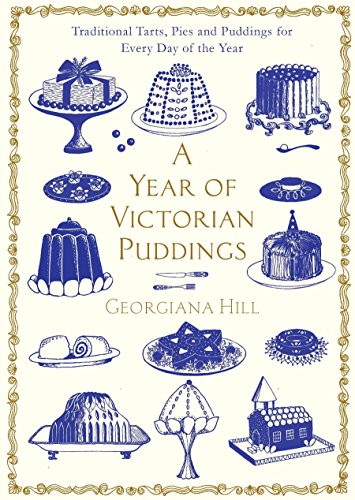 A Year of Victorian Puddings
by Georgiana Hill

A Year of Victorian Puddings Summary

A Year of Victorian Puddings: Traditional Tarts, Pies and Puddings for Every Day of the Year by Georgiana Hill

Originally published in 1862 as Everybody's Pudding Book, this delightful period cookbook offers delicious, comforting Victorian pudding recipes for the cold dark days of winter as well as the sunny sunshine months. Accompanied by the author's no-nonsense and often amusing advice on seasonal ingredients and the appropriateness of puddings for certain occasions, this cookbook is as relevant today as it was in the Victorian era.

The recipes, organised by month, include tarts, fools, fritters, pies and, of course, steamed puddings of every kind. With favourites such as Bakewell tart and bread and butter pudding, it also offers traditional recipes that have long deserved a revival such as Shrewsbury pudding and Medlar tart. A Year of Victorian Puddings is a complete collection of seasonal, traditional English puddings for every day of the year.

Georgiana 'Browning' Hill was the author of a number of cookery books in the late 1800s, which include The Gourmet's Guide to Rabbit Cooking, published in 1859, The Breakfast Book, published in 1865 and How to Cook Apples, published in 1865. Her early cookbooks offered simple food for the middle classes and sold in very large numbers at six pence each. She enjoyed success with her later titles which became more adventurous, with recipes from Spain and France, and were aimed at more serious gourmets. The dates of her birth and death are unknown.

GOR004855214
A Year of Victorian Puddings: Traditional Tarts, Pies and Puddings for Every Day of the Year by Georgiana Hill
Georgiana Hill
Used - Very Good
Hardback
Pan Macmillan
2012-12-01
192
0230767826
9780230767829
N/A
Book picture is for illustrative purposes only, actual binding, cover or edition may vary.
This is a used book - there is no escaping the fact it has been read by someone else and it will show signs of wear and previous use. Overall we expect it to be in very good condition, but if you are not entirely satisfied please get in touch with us.