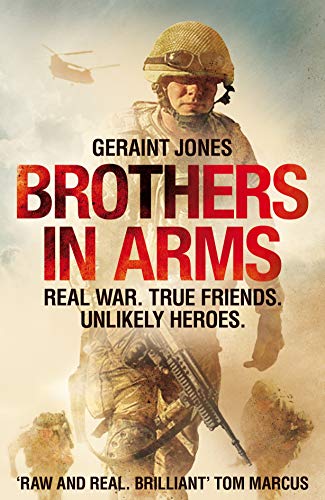 Brothers in Arms
by Geraint Jones

Darkly funny, shockingly honest, Brothers in Arms is an unforgettable account of the brutal reality of war - every scary, exciting moment - and the bonds of friendship that can never be destroyed.

`If you could choose which two limbs got blown off, what would you go for?' Danny said. `Your arms or your legs?'

In July 2009, Geraint (Gez) Jones was sitting in Camp Bastion, Afghanistan with the rest of The Firm - Danny, Jay, Toby and Jake, his four closest friends, all junior NCOs and combat-hardened infantrymen. Thanks to the mangled remains of a Jackal vehicle left tactlessly outside their tent, IEDs were never far from their mind. Within days they'd be on the ground in Musa Qala with the rest of 3 Platoon - a mixed bunch of men Gez would die for.

As they fight furiously, are pushed to their limits, hemmed in by IEDs and hampered by the chain of command, Gez starts to wonder what is the point of it all. The bombs they uncover on patrol, on their stomachs brushing the sand away, are replaced the next day. Firefights are a momentary victory in a war they can see is unwinnable. Gez is a warrior - he wants more than this. But then death and injury start to take their toll on The Firm, leaving Gez with PTSD and a new battle just beginning.

A stunning account of war that gives a detailed look into the psyche of the twenty-first century British infantryman. Jones writes of his brothers and their Afghan experience, from its adrenalin-filled highs to the many lows, with passion and candour. The pace is unrelenting, whilst the epilogue stands as the sobering full stop for a generation of soldiers who campaigned in Iraq and Afghanistan. -- Major Adam Jowett, bestselling author of No Way Out
A gritty, brutal book about men at war. Raw and real. Brilliant. -- Tom Marcus, bestselling author of Soldier Spy and Capture or Kill
At times darkly funny, at times tragic, this is a powerful and honest book about the British soldier, about the reality of conflict and the struggles some face when they come home. -- Brian Wood MC, bestselling author of Double Crossed
Powerful, raw and poignant, but also darkly funny in places. * The Times Magazine *

Geraint Jones deployed as an infantry soldier on three tours of duty to Iraq and Afghanistan. For his actions in Basra, Geraint was awarded the General Officer Commanding's Commendation. Upon leaving the military, Geraint worked to protect commercial shipping against Somali- and Nigerian-based piracy. He is the author of historical fiction novels Blood Forest and Siege, and writes with James Patterson under the name Rees Jones. He also wrote Major Adam Jowett's account of a siege in Musa Qala, No Way Out, which was a top-ten bestseller. He now writes full time and can be found across social media at @gjrbooks. He also has a podcast, Veteran State of Mind.

GOR009859656
Brothers in Arms: Real War. True Friends. Unlikely Heroes. by Geraint Jones
Geraint Jones
Used - Very Good
Hardback
Pan Macmillan
2019-05-14
352
1529000408
9781529000405
N/A
Book picture is for illustrative purposes only, actual binding, cover or edition may vary.
This is a used book - there is no escaping the fact it has been read by someone else and it will show signs of wear and previous use. Overall we expect it to be in very good condition, but if you are not entirely satisfied please get in touch with us.