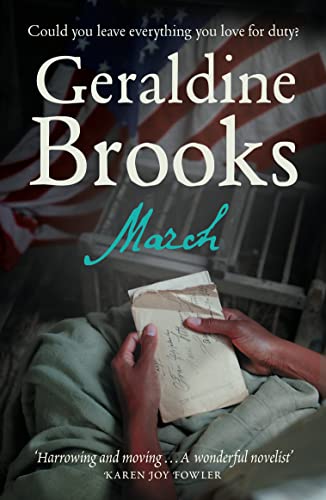 Set during the American Civil War, `March' tells the story of John March, known to us as the father away from his family of girls in `Little Women', Louisa May Alcott's classic American novel. In Brooks's telling, March emerges as an abolitionist and idealistic chaplain on the front lines of a war that tests his faith in himself and in the Union cause when he learns that his side, too, is capable of barbarism and racism. As he recovers from a near-fatal illness in a Washington hospital, he must reassemble the shards of his shattered mind and body, and find a way to reconnect with a wife and daughters who have no idea of the ordeals he has been through.

As Alcott drew on her real-life sisters in shaping the characters of her little women, so Brooks turned to the journals and letters of Bronson Alcott, Louisa May's father, an idealistic educator, animal rights exponent and abolitionist who was a friend and confidante of Ralph Waldo Emerson and Henry David Thoreau. The story spans the vibrant intellectual world of Concord and the sensuous antebellum South, through to the first year of the Civil War as the North reels under a series of unexpected defeats.

Like her bestselling `Year of Wonders', `March' follows an unconventional love story. It explores the passions between a man and a woman, the tenderness of parent and child, and the life-changing power of an ardently held belief.

`This fascinating, beautifully written book both illuminates Alcott's classic and is a moving, gripping work of fiction in its own right.' Image

GOR000391460
9780007165872
0007165870
March by Geraldine Brooks
Geraldine Brooks
Used - Very Good
Paperback
HarperCollins Publishers
2006-01-16
304
Short-listed for British Book Awards: Best Read of the Year 2006
Book picture is for illustrative purposes only, actual binding, cover or edition may vary.
This is a used book - there is no escaping the fact it has been read by someone else and it will show signs of wear and previous use. Overall we expect it to be in very good condition, but if you are not entirely satisfied please get in touch with us
Trustpilot