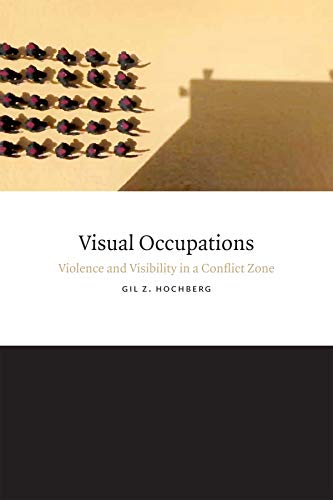 Gil Z. Hochberg examines films, photography, painting and literature by Israeli and Palestinian artists. Israel's greater ability to control what can be seen, how, and from what position drives the Palestinian-Israeli conflict. The artists Hochberg studies challenge Israel's visual and social dominance by creating new ways to see the conflict.

Visual Occupations: Violence and Visibility in a Conflict Zone by Gil Z. Hochberg

In Visual Occupations Gil Z. Hochberg shows how the Israeli Occupation of Palestine is driven by the unequal access to visual rights, or the right to control what can be seen, how, and from which position. Israel maintains this unequal balance by erasing the history and denying the existence of Palestinians, and by carefully concealing its own militarization. Israeli surveillance of Palestinians, combined with the militarized gaze of Israeli soldiers at places like roadside checkpoints, also serve as tools of dominance. Hochberg analyzes various works by Palestinian and Israeli artists, among them Elia Suleiman, Rula Halawani, Sharif Waked, Ari Folman, and Larry Abramson, whose films, art, and photography challenge the inequity of visual rights by altering, queering, and manipulating dominant modes of representing the conflict. These artists' creation of new ways of seeing-such as the refusal of Palestinian filmmakers and photographers to show Palestinian suffering or the Israeli artists' exposure of state manipulated Israeli blindness -offers a crucial gateway, Hochberg suggests, for overcoming and undoing Israel's militarized dominance and political oppression of Palestinians.
"Both Visual Occupations and Digital Militarism are ultimately about the gaze, about the ability of Israelis to see themselves as perpetrators and about the ability of Palestinians to return, refuse, or otherwise manage the disciplining gaze of military and international aid organizations alike. Kuntsman and Stein, and Hochberg all demand that their readers see a long violence in pictures of events that might be taken as spectacular or ruptural, in images that seem to show nothing at all." -- Jenna Brager * The New Inquiry *
"Hochberg's is a timely and important book that demonstrates that the Israeli occupation of Palestine is determined in and by the visual realm and through the shape of visual fields.... Visual Occupations reveals the great extent to which the Israeli occupation of Palestine is interwoven and deeply embedded in the visual politics of cultural production-informing its content, framing, form, message, and even execution-yet the visibility of this influence is not always apparent." -- Sara Rodrigues * PopMatters *
"Ariella Azoulay, Eyal Weizman,Neve Gordon, and others have created a rich corpus of work on spatial inequality in the region, to which Hochberg adds a vital and innovative dimension in her exploration of its visual field. Organized according to the key concepts of concealment, surveillance, and witnessing, Visual Occupations provides a lucid, incisive analysis of the unequal visual rights that sustain the Zionist project." -- Alessandra Amin * Art Journal *
"Visual Occupations is an important and provocative book. Hochberg's discussion of the place of the visual in this 'conflict' that is no longer consigned to a secondary or background subject within the scholarship on Palestine/Israel is a most welcome addition." -- Kiven Strohm * ReOrient *
"Hochberg's study is firmly grounded in the familiar analysis of the politics of visuality, focusing on who can see and whose vision is obstructed, who can be seen and who is confined to invisibility, and on the violent practices that impose this economy of the visual. . . . To achieve both a fruitful general framework and a careful study of the specificities of each practice and each artistic manifestation of the visual power-struggle, Hochberg also incorporates in her close readings various other critical perspectives, such as queer studies, film studies, psychoanalysis, and the politics of ethics." -- Orly Lubin * GLQ *
Gil Z. Hochberg is Associate Professor of Comparative Literature and Gender Studies at UCLA. She is the author of In Spite of Partition: Jews, Arabs and the Limits of Separatist Imagination.
Acknowledgments ix
Introduction. Visual Politics at a Conflict Zone 1
Part I. Concealment
1. Visible Invisibility: On Ruins, Erasure, and Haunting 37
2. From Invisible Spectators to the Spectacle of Terror: Chronicles of a Contested Citizenship 57
Part II. Surveillance
3. The (Soldier's) Gaze and the (Palestinian) Body: Power, Fantasy, and Desire in the Militarized Contact Zone 79
4. Visual Rights and the Prospect of Exchange: The Photographic Event Placed under Duress 97
Part III. Witnessing
5. "Nothing to Look At"; or, "For Whom Are You Shooting?": The Imperative to Witness and the Menace of the Global Gaze 115
6. Shooting War: On Witnessing One's Failure to See (on Time) 139
Closing Words 163
Notes 167
Bibliography 187
Index 207
NGR9780822358879
9780822358879
0822358875
Visual Occupations: Violence and Visibility in a Conflict Zone by Gil Z. Hochberg
Gil Z. Hochberg
Perverse Modernities: A Series Edited by Jack Halberstam and Lisa Lowe
New
Paperback
Duke University Press
2015-05-04
224
N/A
Book picture is for illustrative purposes only, actual binding, cover or edition may vary.
This is a new book - be the first to read this copy. With untouched pages and a perfect binding, your brand new copy is ready to be opened for the first time
Trustpilot