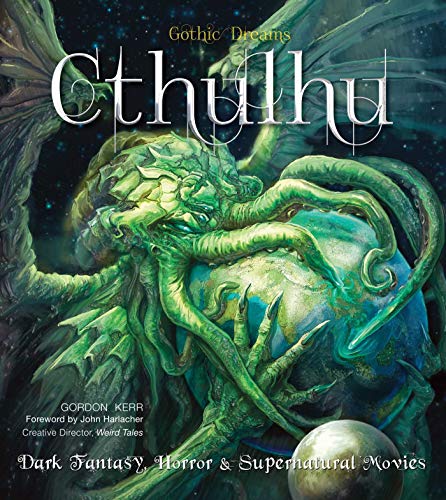 In Stock
$27.49
inc. GST
First brought to life by master of horror H.P. Lovecraft, Cthulhu is an iconic figure that has inspired imagination and terrified generations. In this exciting new book, punchy text describes how fantasy art, literature, movies and even games have been influenced by the power of Cthulhu, accompanied by powerfully atmospheric artworks.
Very Good
Only 1 left

Beneath the waves stirs a malevolent, giant kraken-like monster - the terrifying creation of master of horror H.P. Lovecraft. First brought to life as part of his short story 'The Call of Cthulhu', published in the magazine Weird Tales, and later featuring in several of Lovecraft's works, Cthulhu is an iconic figure that has inspired imagination and terrified generations. It's name has come to define the whole mythos built up around Lovecraft's strange worlds and pantheon of monsters that inspire many writers to this day. In this exciting new book, punchy text describes how fantasy art, literature, movies and even games have been influenced by the terrifying Cthulhu, accompanied by powerfully atmospheric artworks.

Gordon Kerr (author) first met the tentacle-faced one back in the late sixties when R'lyeh erupted through the floorboards of his bedroom in Scotland during one of its brief moments in the sun. Or rather, he thought it did, but it was just a nightmare after reading a book of H.P. Lovecraft stories. He's been having nightmares again writing this book and re-visiting some scary moments from his teenage years. When he's not writing about extra-dimensional beings and hiding beneath the blankets, he scribbles books on a variety of subjects, from art to travel and history to humour.
John Harlacher (Foreword) is the publisher and creative director of Weird Tales magazine, the world's oldest magazine of dark and strange fantasy. Founded in 1923, Weird Tales introduced the world to writers like H.P. Lovecraft (Cthulhu), and Robert E. Howard (Conan the Barbarian), and artists like Virgil Finlay and Margaret Brundage (The queen of gothic fetishism).

GOR005576996
Cthulhu: Dark Fantasy, Horror & Supernatural Movies by Gordon Kerr
Gordon Kerr
Gothic Dreams
Used - Very Good
Hardback
Flame Tree Publishing
2014-04-10
128
1783612185
9781783612185
N/A
Book picture is for illustrative purposes only, actual binding, cover or edition may vary.
This is a used book - there is no escaping the fact it has been read by someone else and it will show signs of wear and previous use. Overall we expect it to be in very good condition, but if you are not entirely satisfied please get in touch with us.