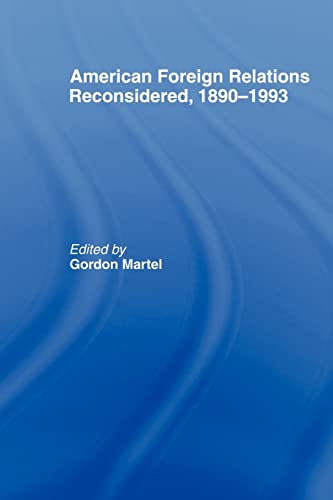 Used Price
$24.49
inc. GST
Free Shipping in Australia
Brings together 12 scholars of US foreign relations. Each contributor provides a concise summary of an important theme in US affairs since the Spanish-American War. US policy process, economic interests, relations with the Third World, and the nuclear arms race have been highlighted.
Reviews:
Trustpilot
Very Good

This major new textbook brings together twelve of the leading scholars of U.S. foreign relations. Each contributor provides a clear, concise summary of an important period or theme in US diplomatic and strategic affairs since the Spanish-American War. Michael Hunt and Joan Hoff provide an overview of the traditions behind US policy and a preview of things to come. Together, the contributors offer a succinct explanation of the controversies and questions that historians have grappled with throughout the twentieth century. Students will find these essays a reliable and useful guide to the various schools of thought which have emerged. Although each of the scholars is well known for their detailed and original work, these essays are new and have been specially commissioned for this book. The articles follow the chronological development of the emergence of the United States as a world power, but special themes such as the American policy process, economic interests, relations with the Third World, and the dynamics of the nuclear arms race have been singled out for separate treatment. American Foreign Relations Reconsidered, 1890-1993 represents essential reading for upper level undergraduates studying modern American history. The book has been designed and written exclusively to meet the needs of students, either as a major course text, or as a set of supplementary readings to support other texts.

"Martel has produced an excellent tool for a job worth doing--giving undergraduates a thought-provoking, but easy-going, grand tour of the dauntingly complicated world of American foreign relations."
-"International History Review, 8/96
"This is a very good book. The editor has selected excellent scholars to survey the state of play in US foreign relations. The reult is the most up-to-date comprehensive historiographical survey of US foreign relations extant.."
-Professor Jerald A. Combs, San Francisco State University
"The selectivity and the orginality of the esaays in "American Foreign Relations Reconsidered give it an edge ... This should be a very useful book. The authors are excellent.."
-Professor Robert L. Beisner, The American University
"Serves undergraduate students taking courses in the history of U.S. foreign relations.."

Preface 1. Traditions of American Diplomacy: From Colony to Great Power 2. Institutions of American Diplomacy and the Policy Process 3. Economic Interest and United States Foreign Policy 4. Imperialism, American Style, 1890 - 1916 5. Wilsonian Diplomacy in War and Peace 6. The Triumph of Isolationism 7. The Interpretative Wars Over the Cold War 8. From Kennedy to Nixon: the End of Concensus 9. From Detents to the Gulf 10. The United States and the Third World 11. Reconsidering the Nuclear Arms Race: The Past as Prelude? 12. American Diplomacy: Retrospect and Prospect 13. Bibliography Notes on Contributors Index

GOR003134014
American Foreign Relations Reconsidered: 1890-1993 by Gordon Martel
Gordon Martel
Used - Very Good
Paperback
Taylor & Francis Ltd
1994-05-19
280
0415104777
9780415104777
N/A
Book picture is for illustrative purposes only, actual binding, cover or edition may vary.
This is a used book - there is no escaping the fact it has been read by someone else and it will show signs of wear and previous use. Overall we expect it to be in very good condition, but if you are not entirely satisfied please get in touch with us.