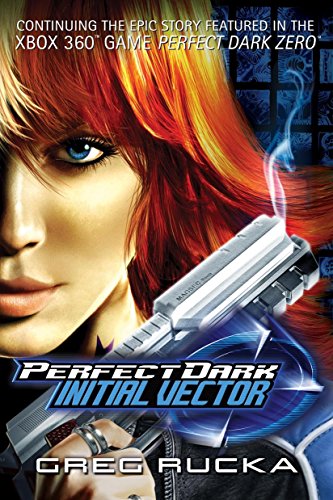 The year is 2020. Hyper-corporations control everything. In the name of domination, these sprawling organisations have recruited their own military forces to fight clandestine battles against one another. Enter ex-bounty hunter Joanna Dark: young, beautiful and lost, her run-in with dataDyne, the world's most powerful organisation, has left her with a wound only vengeance can heal. But Daniel Carrington, the charismatic founder of the Carrington Institute, believes Joanna's deadly skills may be the key to victory over their mutual enemy - an enemy he has been fighting for years.

Greg Rucka is an acclaimed thriller novelist and commonly considered to be one of the "Big Three" writers at DC Comics, for which he has written stories featuring Wolverine, Batman, Adventures of Superman and Wonder Woman.

GOR003869769
Perfect Dark: Initial Vector by Greg Rucka
Greg Rucka
Used - Very Good
Paperback
Pan Macmillan
2006-07-07
352
0330445081
9780330445085
N/A
Book picture is for illustrative purposes only, actual binding, cover or edition may vary.
This is a used book - there is no escaping the fact it has been read by someone else and it will show signs of wear and previous use. Overall we expect it to be in very good condition, but if you are not entirely satisfied please get in touch with us.