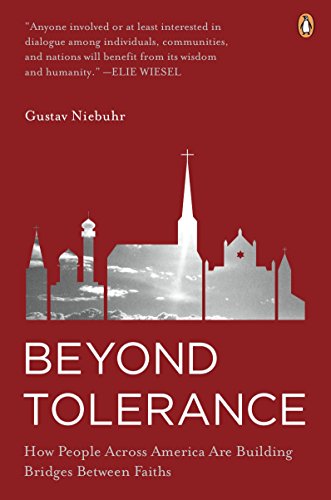 Beyond Tolerance
by Gustav Niebuhr

Used Price
$40.99
inc. GST
Free Shipping in Australia
In this insightful, deeply felt examination of the nature of community and religion, former "New York Times" religion reporter Niebuhr traces the roots of religious freedom in America and the setbacks and triumphs it has encountered along the way.
Reviews:
Trustpilot
Very Good

Beyond Tolerance: How People Across America Are Building Bridges Between Faiths by Gustav Niebuhr

At a time when religious conflict and violence seem to dominate the media, distinguished religion journalist Gustav Niebuhr set off across America to find people who are building, not burning, the bridges between faiths. As he travels across the country-from Queens and Baltimore to Louisville and Los Angeles-he finds Buddhists, Catholics, Jews, Baptists, Muslims, and Episcopalians reaching out to one another to find common ground between their faiths. This insightful and deeply felt exploration of the nature of community and religion is a tribute to their efforts and a boost of much-needed optimism that reminds all Americans of their common goals, no matter their faith.

" Anyone . . . interested in dialogue among individuals, communities, and nations will benefit from Beyond Tolerance's wisdom and humanity."
-Elie Wiesel

" He has the careful scholarship of an academic, but the communication expertise of a journalist skilled at getting to the personal heart of a story."
-Publishers Weekly (starred review)

Gustav Niebuhr, former Religion reporter for the New York Times, is the Associate Professor of Religion at Syracuse University. Over his twenty-year career as a journalist, he's also worked for The Washington Post, The Wall Street Journal, and the Atlanta Journal/Constitution, and has established a reputation as a leading writer about American religion. His work has been published in anthologies, magazines and on the internet. He's a frequent commentator on religion for NPR's "All Things Considered."

GOR010758468
Beyond Tolerance: How People Across America Are Building Bridges Between Faiths by Gustav Niebuhr
Gustav Niebuhr
Used - Very Good
Paperback
Penguin Putnam Inc
2009-07-28
256
0143115553
9780143115557
N/A
Book picture is for illustrative purposes only, actual binding, cover or edition may vary.
This is a used book - there is no escaping the fact it has been read by someone else and it will show signs of wear and previous use. Overall we expect it to be in very good condition, but if you are not entirely satisfied please get in touch with us.