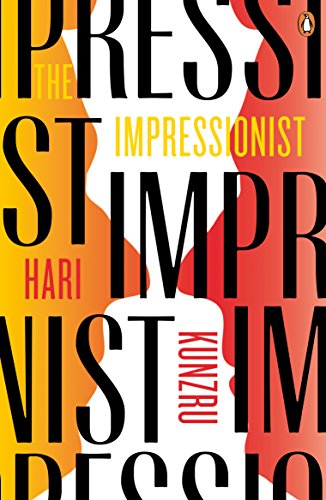 The Impressionist
by Hari Kunzru

In Stock
$14.49
inc. GST
In India, at the birth of the last century, an infant is brought howling into the world, his remarkable paleness marking him out from his brown-skinned fellows. Revered at first, he is later cast out from his wealthy home when his true parentage is revealed. So begins Pran Nath's odyssey of self-discovery.
Very Good
6 in stock

The Impressionist by Hari Kunzru

A sweeping, colourful adventure from the acclaimed author of White Tears

This is the extraordinary story of a child conceived in a wild monsoon night, a boy destined to be an outsider, a man with many names and no name.

Born into luxury but disinherited and cast out onto the streets of Agra, Pran Nath must become a chameleon. Chasing his fortune, he will travel from the red light district of Bombay to the green lawns of England to the unmapped African wilderness. He will play many different roles -- a young prize in a brothel, the adopted son of Scottish missionaries, the impeccably educated young Englishman headed for Oxford -- in order to find the role that will finally fit.

Daring and riotously inventive, The Impressionist is an odyssey of self-discovery: a tale of the many lives one man can live and of the universal search for true identity.

Publisher's description. Discover an odyssey of self-discovery, as one child born different must find his way and his place in the world. From the streets of Agra to Bombay's red light district, from the pristine, cloistered lawns of Oxford to an expedition in West Africa - Pran Nath is a boy who will have many faces, many names, many lives... * Penguin *

Hari Kunzru is the author of the novels The Impressionist, Transmission, My Revolutions and Gods Without Men, and the story collection Noise. He lives in New York and his next novel, White Tears, will be published by Hamish Hamilton in spring 2017.

GOR000453341
The Impressionist by Hari Kunzru
Hari Kunzru
Used - Very Good
Paperback
Penguin Books Ltd
2003-04-03
496
0141008288
9780141008288
Winner of Somerset Maugham Award 2003 Winner of Betty Trask Award 2002 Short-listed for Whitbread Book Awards: First Novel Category 2002 Short-listed for Whitbread Prize (First Novel) 2002
Book picture is for illustrative purposes only, actual binding, cover or edition may vary.
This is a used book - there is no escaping the fact it has been read by someone else and it will show signs of wear and previous use. Overall we expect it to be in very good condition, but if you are not entirely satisfied please get in touch with us.