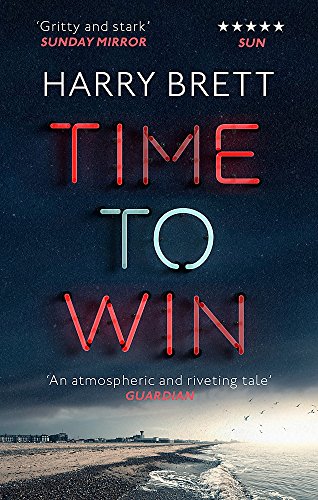 Time to Win
by Harry Brett

Time to Win by Harry Brett

'An atmospheric and riveting tale' Guardian

When local crime boss Richard Goodwin is pulled from the river by his office it looks like suicide. But as his widow Tatiana feared, Rich collected enemies like poker chips, and half of Great Yarmouth's criminal fraternity would have had reason to kill him.

Realising how little she knows about the man she married, Tatty seeks to uncover the truth about Rich's death and take over the reins of the family business, overseeing a waterfront casino deal Rich hoped would put Yarmouth on the map.

Out of the shadows at last, it is Tatty's time now, and she isn't going to let Rich's brother, or anyone else, stand in her way. But an American has been in town asking the right people the wrong questions, more bodies turn up, along with a brutal new gang. The stakes have never been higher.

With her family to protect, and a business to run, Tatty soon learns that power comes with a price . . .

The Godfather in Great YarmouthIn Harry Brett, British crime fiction has its new big beast and in Time To Win, Brett has written a heart-pounding thriller for our time - a 21st century Long Good FridayDarkly brooding and atmospheric . . . a claustrophobic combination of dysfunctional family drama and small town corruption. In Tatty, Harry Brett has created a matriarch to be reckoned with. Noir at its bestIt's not just a body that's washed up, but a seaside town's secrets. Gripping, compelling, original crime dramaTime to Win is fearsomely good: doomy and atmospheric'A tale of family and power and mayhem, Harry Brett's Time to Win is a winner on all counts. Rivetingly told and bracingly paced, it offers readers not only propulsive storytelling but deeper pleasures - foremost, in Tatty, as rich and complicated a female character as one could hope forA taut and atmospheric work of Fenland noir. Time to Win exposes the seediness and brutality which so often dominates rural communities and marks out Harry Brett as a new must read author for fans of the dark stuff'Brilliantly atmospheric, claustrophobic, tense and gripping, Time to Win redraws the landscape of British noir and introduces a fresh and vital voice in Harry Brett

Harry Brett is a pseudonym for Henry Sutton, who is the author of nine previous novels including My Criminal World and Get Me Out Of Here. He also co-authored the DS Jack Frost novel, First Frost, under the pseudonym James Henry. His work has been translated into many languages. His fifth novel, Kids' Stuff, received an Arts Council Writers' Award in 2002, and became a long-running stage play in Riga, Latvia.

He has judged numerous literary prizes, including the John Lewellyn Rhys Prize and the Theakstons Old Peculier Crime Novel of the Year. He has been the Literary Editor of Esquire magazine and the Books Editor of the Daily Mirror. He teaches Creative Writing at the University of East Anglia, where he is a Senior Lecturer and the director of the new Creative Writing MA Crime Fiction.

He lives in Norwich with his family.

GOR009031650
Time to Win by Harry Brett
Harry Brett
The Goodwins
Used - Like New
Paperback
Little, Brown Book Group
2018-04-24
352
1472152654
9781472152657
N/A
Book picture is for illustrative purposes only, actual binding, cover or edition may vary.
The book has been read, but looks new. The book cover has no visible wear, and the dust jacket is included if applicable. No missing or damaged pages, no tears, possible very minimal creasing, no underlining or highlighting of text, and no writing in the margins.