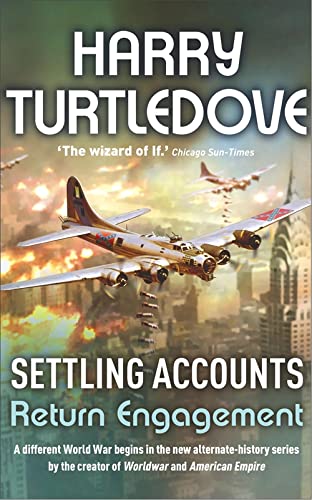 It is 1939, and the world is overshadowed by the thunder-clouds of war, once again. In this alternate world the US prepares for war while across the Pacific Japan is ready to fight again.

Once again brother fights brother, friend against friend and the New World is ravaged by all the horrors of modern warfare.

This is the first book in a new series on the first global conflict by the modern day master of alternate history. Epic, exciting and incredibly powerful, it deals with relatively recent past so cleverly. This is World War II as it might have been...

'Turtledove plays heady games with actual history, scattering object lessons and bitter ironies along the way. Strong, complex characters against a sweeping alt-historical background.' Kirkus Reviews on Return Engagements
'This political and racial background makes for much of the best writing in the book, peopled as it is with Turtledove's usual mass of characters and actions . . . Turtledove's books are always great entertainment but in all these novels about an alternate North America the possible route of democracy, demagoguery and repression ring all too true . . . the power of the book is in its ordinary people and their struggles.' SFX Magazine on Return Engagements
'An impressively detailed and consistently believable alternative history . . . disturbing, convincing.' Vector 239 on RETURN ENGAGEMENTS
'With shocking vividness, Turtledove demonstrates the extreme fragility of our modern world ... This is state-of-the-art alternate history, nothing less' Publishers Weekly (starred review for How Few Remain)
'Good fun. It has an authentic speculative quality, energy and dash.' Time Out on A World of Difference
'Engrossing ... definitely the work of one of alternate history's authentic modern masters ... totally fascinating.' Booklist on The Great War series
'The latest volume in Turtledove's colossal and brialliant saga of an alternate (and disunited) United States may be the strongest and most compelling since the opener, How Few Remain.' Publishers Weekly on American Empire series

GOR010597721
Settling Accounts: Return Engagement by Harry Turtledove
Harry Turtledove
Used - Like New
Paperback
Hodder & Stoughton
2005-01-03
640
034082686X
9780340826867
N/A
Book picture is for illustrative purposes only, actual binding, cover or edition may vary.
The book has been read, but looks new. The book cover has no visible wear, and the dust jacket is included if applicable. No missing or damaged pages, no tears, possible very minimal creasing, no underlining or highlighting of text, and no writing in the margins.