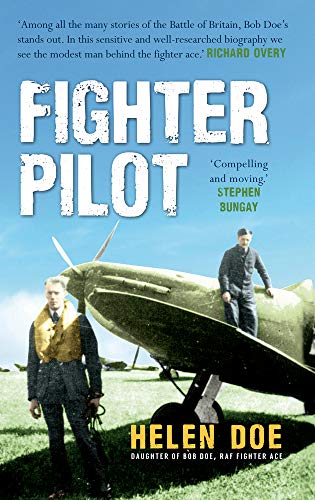 Used Price
$20.99
inc. GST
Free Shipping in Australia
A family-authorised biography of one of the top-scoring aces of the Battle of Britain.
Reviews:
Trustpilot
Very Good Good

'I saw a mass of ME 109s and went up to attack. I looked behind and found three on each side diving to attack me.' Bob Doe, Combat Report 16 August 1940 In June 1940, at the age of twenty, Bob Doe believed himself to be the worst pilot in his squadron. Just three months later he was a highly decorated hero of the Battle of Britain. This is the story of the pilot who, in his own estimation, was not promising material for a fighter pilot. He left school at fourteen and had none of the qualifications or background of his fellow officers, but he found his place in the Battle of Britain, shooting down fourteen enemy aircraft and sharing in two others. He became the third-highest-scoring pilot of the Battle, and was unusual in achieving these victories in both Spitfires and Hurricanes. This biography, written by his daughter, a noted professional historian, tells the story of Bob's remarkable career, including his time in Burma leading an Indian Air Force squadron against the Japanese. He was a modest man who spoke for many veterans when he asked that they should not be considered as heroes but remembered for what they did. This book celebrates Bob's achievements and also those of the men who fought alongside him.

'Among all the many stories of the Battle of Britain, Bob Doe's stands out. In this sensitive and well-researched biography we see the modest man behind the fighter ace.' -- Richard Overy
'Compelling and moving.' -- Stephen Bungay
'[A] truly wonderful biography ... meticulously researched and referenced and also expertly written in a fashion that makes it an exceptionally good read ... If one were to recommend a single fighter pilot biography ... this would be it.' -- Britain at War
'This book is probably the best biographical account I have read of anybody in any walk of life and I recommend it without reservation. Whilst the final comment from Doe, that he and his colleagues should not be seen as heroes but remembered for what they did, is probably a good reflection of the man but perhaps too modest, given the pivotal importance of the Battle of Britain and its place in history.' -- Royal Air Force Historical Society, Journal 65 (2017) pp. 129-131

Helen Doe is a maritime historian who has published extensively on nineteenth-century sail and steam, including co-editing and contributing to the award-winning Maritime History of Cornwall. Her previous book was The First Atlantic Liner: Brunel's Great Western Steamship. Her interests are in the people connected with vessels, whether on land or at sea. She has a PhD from the University of Exeter, where she has been a lecturer for some years. She is a Fellow of the Royal Historical Society, Vice Chairman of the British Commission for Maritime History, a member of the UK Government's Council of Experts for National Historic Ships and trustee of the SS Great Britain Trust.

GOR007790694
Fighter Pilot: The Life of Battle of Britain Ace Bob Doe by Helen Doe
Helen Doe
Used - Very Good
Paperback
Amberley Publishing
2016-07-15
256
1445660121
9781445660127
N/A
Book picture is for illustrative purposes only, actual binding, cover or edition may vary.
This is a used book - there is no escaping the fact it has been read by someone else and it will show signs of wear and previous use. Overall we expect it to be in very good condition, but if you are not entirely satisfied please get in touch with us.