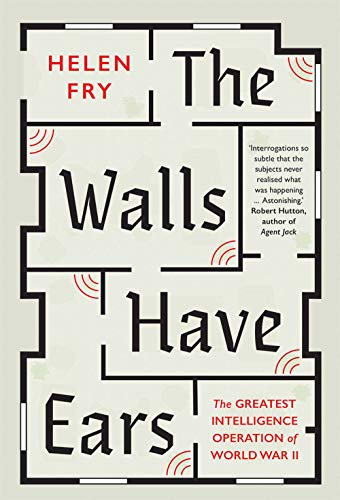 The Walls Have Ears
by Helen Fry

In Stock
30,99 $
inc. GST
A history of the elaborate and brilliantly sustained World War II intelligence operation by which Hitler's generals were tricked into giving away vital Nazi secrets
Very Good
Only 4 left

The Walls Have Ears Summary

The Walls Have Ears: The Greatest Intelligence Operation of World War II by Helen Fry

At the outbreak of World War II, MI6 spymaster Thomas Kendrick arrived at the Tower of London to set up a top secret operation: German prisoners' cells were to be bugged and listeners installed behind the walls to record and transcribe their private conversations. This mission proved so effective that it would go on to be set up at three further sites-and provide the Allies with crucial insight into new technology being developed by the Nazis.

In this astonishing history, Helen Fry uncovers the inner workings of the bugging operation. On arrival at stately-homes-turned-prisons like Trent Park, high-ranking German generals and commanders were given a "phony" interrogation, then treated as "guests," wined and dined at exclusive clubs, and encouraged to talk. And so it was that the Allies got access to some of Hitler's most closely guarded secrets-and from those most entrusted to protect them.

The Walls Have Ears Reviews

"[A] remarkable book" -Nick Rennison, Daily Mail (Book Of The Week)
"Interesting, informative, enlightening" - All About History
"This is a great book and a valuable contribution to scholarship on the Second World War" - Michael Goodman, BBC History Magazine
"The world has long been familiar with Bletchley Park, where German codes were cracked by a secret army of listeners intercepting enemy wireless transmissions. But now, another clandestine intelligence operation that played an equally important part in the war has come to light."-Tony Rennell, Daily Mail (War Books of the Year)


"A fascinating, well-researched glimpse into a hitherto neglected corner of the intelligence history of the Second World War."-Nigel West, author of Double Cross in Cairo
"Fry shines a revealing light into a dark and forgotten corner of the British wartime intelligence effort, with truly remarkable results."-Mark Felton, author of Operation Swallow
"Fry has uncovered an astonishing story of wartime espionage, featuring prisoners of war, microphones hidden in vegetation and interrogations so subtle that the subjects never realised what was happening. Almost as amazing as the operation itself is that it stayed secret so long."-Robert Hutton, author of Agent Jack
"Fry traces the development and growing sophistication of interrogation technique during the Second World War, the overlay of apparent British eccentricity and creative deception on a determined intelligence operation ... Fascinating."-Michael Jago, author of The Man Who Was George Smiley

Helen Fry is the author of The London Cage and over twenty books focusing on intelligence and POWs in World War II. She consulted on the docudrama Spying on Hitler's Army and appeared in BBC's Home Front Heroes.

GOR010073679
The Walls Have Ears: The Greatest Intelligence Operation of World War II by Helen Fry
Helen Fry
Used - Very Good
Hardback
Yale University Press
2019-08-16
336
0300238606
9780300238600
N/A
Book picture is for illustrative purposes only, actual binding, cover or edition may vary.
This is a used book - there is no escaping the fact it has been read by someone else and it will show signs of wear and previous use. Overall we expect it to be in very good condition, but if you are not entirely satisfied please get in touch with us.