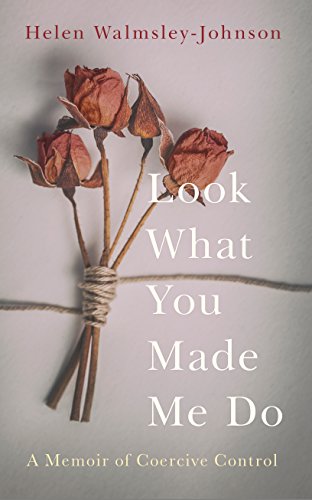 Look What You Made Me Do by Helen Walmsley-Johnson

Not all abuse leaves a mark - a powerful memoir of coercive control.

Look What You Made Me Do: A Powerful Memoir of Coercive Control by Helen Walmsley-Johnson

For more than two years, BBC Radio 4's The Archers ran a disturbing storyline centred on Helen Tichener's abuse at the hands of her husband Rob. Not the kind of abuse that leaves a bruise, but the sort of coercive control that breaks your spirit and makes it almost impossible to walk away. As she listened to the unfolding story, Helen Walmsley-Johnson was forced to confront her own agonizing past.

Helen's first husband controlled her life, from the people she saw to what was in her bank account. He alienated her from friends and family and even from their three daughters. Eventually, he threw her out and she painfully began to rebuild her life.

Then, divorced and in her early forties, she met Franc. Kind, charming, considerate Franc. For ten years she would be in his thrall, even when he too was telling her what to wear, what to eat, even what to think.

Look What You Made Me Do is her candid and utterly gripping memoir of how she was trapped by a smiling abuser, not once but twice. It is a vital guide to recognizing, understanding and surviving this sinister form of abuse and its often terrible legacy. It is also an inspirational account of how one woman found the courage to walk away.

Powerful . . . every nerve ending was jangling . . . chilling -- Jane Garvey * Woman's Hour *
Coercive control may have recently been made illegal in Britain, but not many women dare to open up about it. Helen Walmsley-Johson is an exception * The Times *
A hard book to read, harder I imagine to have written. But absolutely necessary if you want to understand coercive control. Read it. * Suzanne Moore *
Brilliant and engrossing * David Challen *
At first, Helen Walmsley-Johnson was so desperate to please her boyfriend Franc that she overlooked his exacting standards, his overbearing interest in what she wore and who she saw. But before long, her every move was controlled by the man who claimed to love her. The scariest part? How easily such behaviour - and worse - became her new normal. * You Magazine *
A piercingly accurate depiction of being in a controlling relationship and how difficult it is to leave -- Dawn Foster
A forensic investigation into how an intelligent and proud forty-three year old woman became trapped in an abusive love affair ... a warming subtle realistic narrative of recovery -- Terri Apter * TLS *
For many years, Helen Walmsley-Johnson was the author of the Guardian's 'The Vintage Years' blog, which had 65,000 regular readers and she is still a regular contributor to the Guardian and the New Statesman. Before beginning her column, she worked for the Daily Telegraph and as Alan Rusbridger's PA at the Guardian. Her book about middle age, The Invisible Woman, was published to great acclaim in 2015. Her experience surviving coercive control is powerfully told in her personal memoir Look What You Made Me Do. She lives in a village in the Midlands.
GOR008967888
9781509848737
1509848738
Look What You Made Me Do: A Powerful Memoir of Coercive Control by Helen Walmsley-Johnson
Helen Walmsley-Johnson
Used - Very Good
Hardback
Pan Macmillan
2018-03-08
336
N/A
Book picture is for illustrative purposes only, actual binding, cover or edition may vary.
This is a used book - there is no escaping the fact it has been read by someone else and it will show signs of wear and previous use. Overall we expect it to be in very good condition, but if you are not entirely satisfied please get in touch with us
Trustpilot