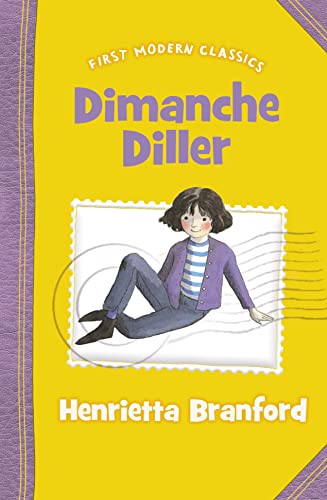 When Dimanche is orphaned at the tender age of one, Chief Inspector Barry Bullpit advertises for any known relative to come forward. Unluckily for Dimanche, her real aunt does not see the message, but an evil money-grabbing imposter does. Dimanche, heir to an enormous fortune, is sent to live with the dreaded Valburga Vilemile, who tries to rid herself of Dimanche at every opportunity. But her lack of success is partly due to Dimanche's wits and courage, and partly to Polly Pugh, Dimanche's young and pretty nanny, who foils all Valpurga's attempts and helps Dimanche find long-term happiness with her real aunt.

All the ingredients for a brilliant, attention-grabbing shorter novel are here; evil plots, kidnapping, wicked villains and gorgous heroines. Every chapter makes you want to shout 'Look behind you' or 'Oh no she doesn't' at almost every page turn.

"An extraordinary story with an amazing set of characters." Michael Rosen

"A galloping story of escape and adventure." The Guardian

Henrietta Branford was born in India and lived with her husband Paul Carter and three children in Southampton. Her books are all based on people she knew. As well as winning the Smarties Prize for Dimanche Diller, she won The Guardian Fiction Award for her longer novel Fire, Bed and Bone [Walker]. Her other books include the picture book Little Pig Figwort ], Ruby Red, Spacebaby, Spacebaby and the Megavolt Monster [all Collins], The Fated Sky [Walker]. Henrietta Branford died in 1999. The Branford Boase award for a first novel is in memory of Henrietta and her editor at Walker, Wendy Boase who both died in the same year.

GOR003934150
Dimanche Diller (First Modern Classics) by Henrietta Branford
Henrietta Branford
First Modern Classics
Used - Very Good
Paperback
HarperCollins Publishers
2010-03-04
144
000733396X
9780007333967
N/A
Book picture is for illustrative purposes only, actual binding, cover or edition may vary.
This is a used book - there is no escaping the fact it has been read by someone else and it will show signs of wear and previous use. Overall we expect it to be in very good condition, but if you are not entirely satisfied please get in touch with us.