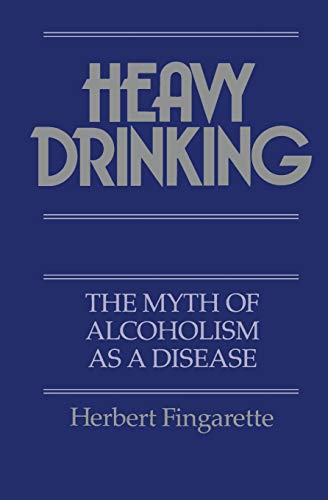 Heavy Drinking: The Myth of Alcoholism as a Disease by Herbert Fingarette

Heavy Drinking informs the general public for the first time how recent research has discredited almost every widely held belief about alcoholism, including the very concept of alcoholism as a single disease with a unique cause. Herbert Fingarette presents constructive approaches to heavy drinking, including new methods of helping heavy drinkers and social policies for preventing heavy drinking and the harms associated with it.

Herbert Fingarette, a distinguished professor at the University of California, has been a consultant on alcoholism and addiction to the World Health Organization, and a Fellow of the Stanford Center for Advanced Studies in the Behavioral Sciences. His work has had a significant influence on the U.S. Supreme Court, state supreme courts, and current national policy makers on substance abuse.

INTRODUCTION
What Science Now Knows, but the Public Doesn't

CHAPTER 1
Where Did We Get the Idea That Alcoholism
Is a Disease?

CHAPTER 2
Can Alcoholics Control Their Drinking?

CHAPTER 5
Understanding Heavy Drinking as a Way of Life

GOR001967413
Heavy Drinking: The Myth of Alcoholism as a Disease by Herbert Fingarette
Herbert Fingarette
Used - Very Good
Paperback
University of California Press
1989-06-21
195
0520067541
9780520067547
N/A
Book picture is for illustrative purposes only, actual binding, cover or edition may vary.
This is a used book - there is no escaping the fact it has been read by someone else and it will show signs of wear and previous use. Overall we expect it to be in very good condition, but if you are not entirely satisfied please get in touch with us.