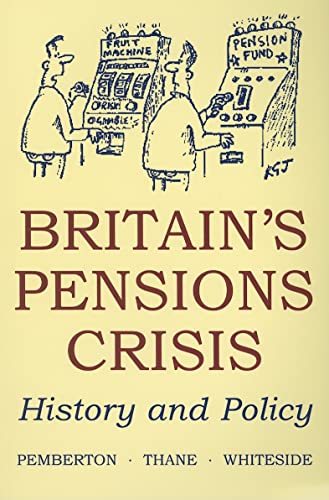 Used Price
$23.99
inc. GST
Free Shipping in Australia
British pensions are in crisis. This volume explores the past, present and future of pensions in Britain. Leading experts discuss both the politics and economics of this key area of social policy, and consider developments in the systems of other European countries and in North America.
Reviews:
Trustpilot
Very Good

British pensions are in crisis. Yet in all the discussion of what exactly the crisis consists of, and how it might be addressed, attention to the history of how the crisis has come about is surprisingly lacking. History has much to tell us about how pensions have developed in Britain, how that development has shaped the crisis that we now face, and how decisions taken in the past constrain our options for the future. In this volume, leading experts on the past and present of pensions in Britain debate the present crisis, and the lessons of history for those seeking to craft solutions to it that are both effective and enduring. The volume also contains a number of chapters which draw important lessons from the experience of other European and North American countries over the past few decades. Containing reactions to the second report of the Pensions Commission and the government's response to it, Britain's Pensions Crisis will be essential reading for all those interested in the politics and economics of this key area of social policy.