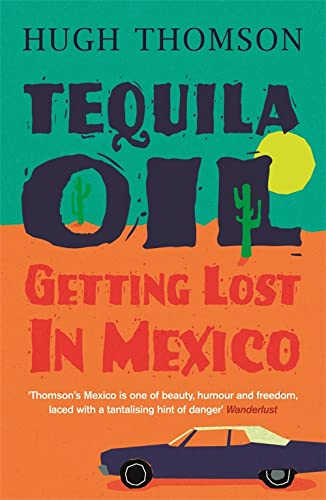 Used Price
$16.49
inc. GST
Free Shipping in Australia
'Try this tequila oil, Hugito. Just as the alcohol hits your stomach, the chilli will as well and blow it back into your brain. It will take your head off.' Explorer Hugh Thomson takes on Mexico.
Very Good

Tequila Oil: Getting Lost In Mexico by Hugh Thomson

'Try this tequila oil, Hugito. Just as the alcohol hits your stomach, the chilli will as well and blow it back into your brain. It will take your head off.' Explorer Hugh Thomson takes on Mexico.

It's 1979, Hugh Thomson is eighteen, far from home, with time to kill - and on his way to Mexico. When a stranger tells him there's money to be made by driving a car over the US border to sell on the black market in Central America, Hugh decides to give it a go.

Throwing himself on the mercy of Mexicans he meets or crashes into, Hugh and his Oldsmobile 98 journey through the region, meeting their fate in the slums of Belize City.

Thirty years on, Hugh returns - older but not necessarily wiser - to complete his journey.

A beautiful book, full of appreciation and aphorism, an unashamedly personal story...it takes the reader to places we may not have dreamed of going... * INDEPENDENT *
A thrilling travelogue that rails against the homogenisation of the world. * TRAVELLER *
Thomson's Mexico is one of beauty, humour and freedom, laced with a tantalising hint of danger. * WANDERLUST *
Delightful, celebratory and honest....In a way it is the first installment of his now-complete trilogy, his Cochineal Red and The White Rock being two of the finest books on Latin America of recent years. -- Rory MacLean * GUARDIAN *
Thomson steers through a series of hair-raising encounters with wit, wisdom and an easy charm... -- Kathleen Wyatt * TIMES *
Utterly beguiling * INDEPENDENT *
'A sublime and richly informative travelogue from a true heavyweight explorer * WATERSTONES BOOKS QUARTERLY *

TEQUILA OIL was serialised by BBC Radio 4 as their Book of the Week. Hugh Thomson has led many research expeditions to Peru, about which he has written an acclaimed series of books: THE WHITE ROCK and its sequel, COCHINEAL RED. He also edited Hiram Bingham's classic account of the discovery of Machu Picchu, LOST CITY OF THE INCAS. An expedition to a usually inaccessible part of the Himalayas and the source of a legend resulted in NANDA DEVI: A JOURNEY TO THE LAST SANCTUARY. He is also a film-maker and has won many awards for his documentaries, which include INDIAN JOURNEYS WITH WILLIAM DALRYMPLE, and DANCING IN THE STREET: A ROCK AND ROLL HISTORY. He lives in Oxfordshire.

GOR002109977
Tequila Oil: Getting Lost In Mexico by Hugh Thomson
Hugh Thomson
Used - Very Good
Paperback
Orion Publishing Co
2010-02-18
240
0753826941
9780753826942
N/A
Book picture is for illustrative purposes only, actual binding, cover or edition may vary.
This is a used book - there is no escaping the fact it has been read by someone else and it will show signs of wear and previous use. Overall we expect it to be in very good condition, but if you are not entirely satisfied please get in touch with us.