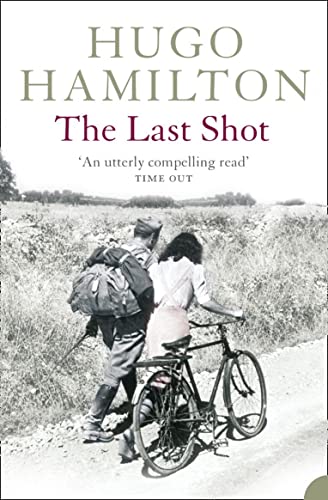 The Last Shot
by Hugo Hamilton

In this remarkable book, Hugo Hamilton tells the story of individuals caught up in the turbulent last days of World War II.

The Last Shot by Hugo Hamilton

In this remarkable book, Hugo Hamilton tells the story of individuals caught up in the turbulent last days of World War II.

Stationed in Czechoslovakia, lovers Bertha Sommer and Officer Franz Kern long to escape from the war and its consequences, but they are trapped between the advancing Red Army and the fear of their own system, which punishes desertion with death.

Meanwhile, an American contemporary, living in Germany, sets out on a mission to find the exact location of the last shot fired in the war, in a personal attempt to close this horrific chapter in humanity's history.

`An utterly compelling read.' Time Out

`A remarkable book whose presence remains long after the reading is finished...A fine novel from a very talented writer.' Irish Times

`Hamilton is a natural storyteller, with poise, daring and control...He is already quite unmistakable.' Times Literary Supplement

Praise for `The Speckled People':

`This is the most gripping book I've read in ages. And it's beautifully written: what could have been safe memories are made new-lived and real in this fascinating, disturbing and often very funny memoir.' Roddy Doyle

`"The Speckled People" is poetic in its language and construction, lyrical in so many of its descriptions. There is a story full of several different kinds of passion with a real tragedy at its heart. The pain is all there, but so is its antidote.' Margaret Forster

`Donner und Blitzen! What the Jaysus! A memoir of warmth and wisdom. And at last a good - if flawed - Irish father. A beautiful German mother. And not too much rain. It is tender and profound and, best of all, tells the truth. I loved it.' Patrick McCabe

* 'A fine and timely book from an exquisitely gifted writer, this is beautiful, subtle, unflashy, perfectly realised and quite extraordinarily powerful.'
Joseph O'Connor

Hugo Hamilton was born and grew up in Dublin. He is the author of five highly acclaimed novels: 'Surrogate City', `Last Shot' and 'The Love Test', 'Headbanger' and 'Sad Bastard' ; one collection of short stories; and the highly successful memoir `The Speckled People'. He has worked as a writer-in-residence at many leading universities, including most recently at Trinity College, Dublin. He has just returned to Ireland from a DAAD scholarship in Berlin.

GOR001404678
The Last Shot by Hugo Hamilton
Hugo Hamilton
Used - Very Good
Paperback
HarperCollins Publishers
2006-04-21
192
0007198779
9780007198771
N/A
Book picture is for illustrative purposes only, actual binding, cover or edition may vary.
This is a used book - there is no escaping the fact it has been read by someone else and it will show signs of wear and previous use. Overall we expect it to be in very good condition, but if you are not entirely satisfied please get in touch with us.