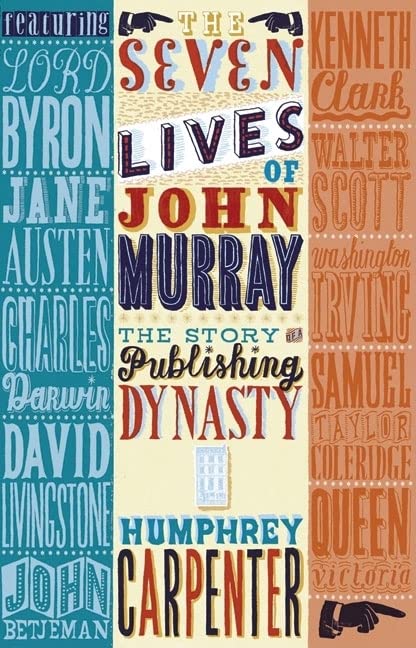 The Seven Lives of John Murray
by Humphrey Carpenter

The Seven Lives of John Murray: The Story of a Publishing Dynasty by Humphrey Carpenter

From the burning of Byron's memoirs, Jane Austen's clipped businesslike manner, and the lucrative controversy caused by the publication of Darwin's Origin of Species, through to the discovery of the new young poet John Betjeman, the name John Murray has for more than two hundred years been synonymous with challenging, intelligent and progressive publishing.

From its birth in 1768, when the first John Murray of Edinburgh came down to London, each of its seven leaders has made his own contribution to the dissemination of literature and the understanding of the world. One became Byron's publisher and confidante; another began the revolutionary series of Murray handbooks which transformed world travel in the early years of the railways; a third broke controversial new ground with the publication of Queen Victoria's letters. So the tradition progressed to the end of the twentieth century, and a list of literary giants including Patrick Leigh Fermor, Osbert Lancaster, Fransoise Sagan and Poet Laureate, John Betjeman. Written in Carpenter's rollicking and iconoclastic style, it is an affectionate and vibrant account of the longest-surviving publishing house in the world.

'Humphrey Carpenter's history of the firm, completed by other hands after his death in 2005, is an evocation of a vanished age' * Jeremy Lewis, Daily Telegraph *
'A treasure-trove of fascinating information paced into Humphrey Carpenter's riveting history of the world's longest surviving publishing house ...Terrific' * Val Hennessy, Daily Mail *
'The late Humphrey Carpenter, a delightful and generous-minded man to whose memory I doff my cap, died while still at work on the manuscript of Seven Lives' * Independent on Sunday *
'The highs and lows of the literary world are reported with panache in this fascinating book. Superb photographs too' * Tatler *

Humphrey Carpenter began his career working for the BBC and appeared on Radio 3 and 4 many times since. He has written many bestselling, award-winning biographies whose subjects include Tolkein, CS Lewis, Ezra Pound, WH Auden, Bejamin Britten, Spike Milligan. He was a prolific author of childrens' book and a skilled jazz musician. He died in January 2005.

GOR003022499
The Seven Lives of John Murray: The Story of a Publishing Dynasty by Humphrey Carpenter
Humphrey Carpenter
Used - Very Good
Hardback
Hodder & Stoughton General Division
2008-07-10
384
0719565324
9780719565328
N/A
Book picture is for illustrative purposes only, actual binding, cover or edition may vary.
This is a used book - there is no escaping the fact it has been read by someone else and it will show signs of wear and previous use. Overall we expect it to be in very good condition, but if you are not entirely satisfied please get in touch with us.