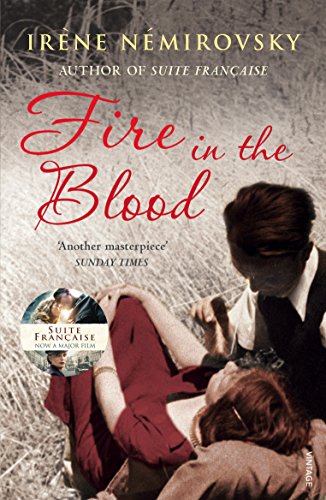 Fire in the Blood
by Irene Nemirovsky

Fire in the Blood Summary

Fire in the Blood by Irene Nemirovsky

From the author of the bestselling Suite Francaise. Set in the rural French town in Burgundy that would also form the backdrop to the bestselling Suite Francaise, Fire in the Blood is the story of Silvio, his cousin's wife Helene, her second husband Francoise, and of the truths, deaths, marriages, children, houses and mills that bind them with love and hatred, deception and betrayal.

Customer Reviews - Fire in the Blood

Fire in the Blood Reviews

"Another masterpiece" * Sunday Times *
"Mesmerising...another gem from a glittering career cut tragically short" * Daily Express *
"A literary find of the same quality as Suite Francaise...it has a universal resonance by exhibiting not only what people do to each other but what the passing of time does to us all" -- Peter Kemp * Sunday Times *
"Magnificently atmospheric... She is so clever, quick and observant, that every character in the story bounds into life" -- Carmen Callil * Financial Times *
"Gripping and full of interest...it confirms Nemirovsky's brilliance as a storyteller with a deep understanding of the hidden flaws and cruelties in the human heart" * Sunday Telegraph *

Irene Nemirovksy was born in Kiev in 1903, the daughter of a successful Jewish banker. In 1918 her family fled the Russian Revolution for France where she became a bestselling novelist, author of David Golder, Le Bal and other works published in her lifetime, as well as the posthumous Suite Francaise. Prevented from publishing when the Germans occupied France in 1940, she stayed with her husband and two small daughters in the small village of Issy-l'Eveque (in German occupied territory) where she had moved from Paris just before the invasion. In July 1942 she was arrested by the French police and interned in Pithiviers concentration camp, and from there immediately deported to Auschwitz where she died in August 1942. The first French publication of Fire in the Blood, by the publishers who discovered and published Suite Francaise, was in March 2007.

GOR000933747
Fire in the Blood by Irene Nemirovsky
Irene Nemirovsky
Used - Very Good
Paperback
Vintage Publishing
2008-10-02
176
0099516098
9780099516095
N/A
Book picture is for illustrative purposes only, actual binding, cover or edition may vary.
This is a used book - there is no escaping the fact it has been read by someone else and it will show signs of wear and previous use. Overall we expect it to be in very good condition, but if you are not entirely satisfied please get in touch with us.