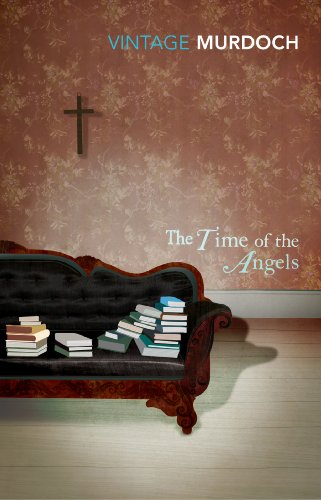 The Time Of The Angels
by Iris Murdoch

These seven characters maintain a constant dance of attraction and repulsion, misunderstanding and revelation, the centre of which is the enigmatic Carel himself - a priest who believes that, God being dead, His angels have been released.

The Time Of The Angels Summary

The Time Of The Angels by Iris Murdoch

Carel is widowed rector presiding over a London church destroyed during the war. The rectory is home to an array of residents: his daughter, Muriel; his beautiful invalid ward, Elizabeth; their West Indian servant, Pattie; Eugene, a Russian emigre, and his delinquent son, Leo. Carel's brother, Marcus, is co-guardian of Elizabeth, but his attempts to get closer to the rector are constantly rebuffed.

These seven characters maintain a constant dance of attraction and repulsion, misunderstanding and revelation, the centre of which is the enigmatic Carel himself - a priest who believes that, God being dead, His angels have been released.

The Time Of The Angels Reviews

Iris Murdoch was one of the best and most influential writers of the twentieth century...she kept the traditional novel alive, and in doing so changed what it is capable of * Guardian *
The Time of the Angels is certainly her best; wittier, more lyrical, more deeply felt than ever before. She is an enchantress * Sunday Times *
I can think of few other novelists who could have written so superbly and so surely of the good and evil that encompasses us all * Daily Telegraph *

Iris Murdoch was born in Dublin in 1919. She read Classics at Somerville College, Oxford, and after working in the Treasury and abroad, was awarded a research studentship in Philosophy at Newnham College, Cambridge. In 1948 she returned to Oxford as fellow and tutor at St Anne's College and later taught at the Royal College of Art. Until her death in 1999, she lived in Oxford with her husband, the academic and critic, John Bayley. She was made a Dame of the British Empire in 1987 and in the 1997 PEN Awards received the Gold Pen for Distinguished Service to Literature.

Iris Murdoch made her writing debut in 1954 with Under the Net. Her twenty-six novels include the Booker prize-winning The Sea, The Sea (1978), the James Tait Black Memorial prize-winning The Black Prince (1973) and the Whitbread prize-winning The Sacred and Profane Love Machine (1974). Her philosophy includes Sartre: Romantic Rationalist (1953) and Metaphysics as a Guide to Morals (1992); other philosophical writings, including 'The Sovereignty of Good' (1970), are collected in Existentialists and Mystics (1997).

GOR010381641
The Time Of The Angels by Iris Murdoch
Iris Murdoch
Used - Like New
Paperback
Vintage Publishing
2002-04-04
256
0099429098
9780099429098
N/A
Book picture is for illustrative purposes only, actual binding, cover or edition may vary.
The book has been read, but looks new. The book cover has no visible wear, and the dust jacket is included if applicable. No missing or damaged pages, no tears, possible very minimal creasing, no underlining or highlighting of text, and no writing in the margins.