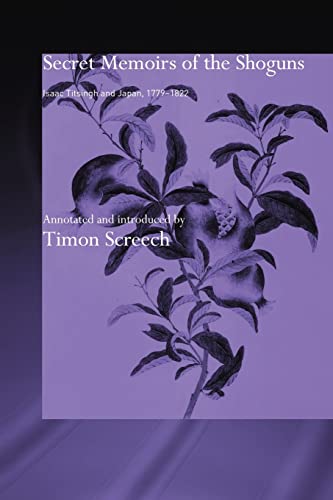 Secret Memoirs of the Shoguns by Isaac Titsingh

Isaac Titsingh was intermittently head of the Japan factory (trading station) of the Dutch East India Company 1780-94. He was a career merchant, but unusual in having a classical education and training as a physician. His impact in Japan was enormous, but he left disappointed in the ability of the country to embrace change. After many years in Java, India and China, he came to London, and then settled in Paris where he devoted himself to compiling translations of prime Japanese texts. It is one of the most exciting anthologies of the period and reveals the almost unknown world of eighteenth-century Japan, discussing politics, history, poetry and rituals. The Illustrations of Japan appeared posthumously in 1821-1822 in English, French and Dutch. This fully annotated edition makes the original English version available for the first time in nearly two centuries

'Titsingh's narrative is useful in that he never sees Japan as a monolithic and static society where everybody thought the same way. Instead, he is constantly aware of the competing groups and interests that make up any complex society, in particular drawing a distinction between those who favored more ties with the outside world and those who didn't, described as 'frogs in a well' because of their limited horizons. The widely traveled Titsingh was quite the opposite.' - Metropolis

'Carefully researched and with copious rare illustrations, Screech's edited version of Titsigh's original writings offers plenty of interesting snap-shots of life in the Edo Period - as seen through Dutch eyes.' - Kansai Time Out

'Screech has done a great service...this is a facinating and richly rewarding account of the Japan that impinged upon the senses and intellect of a well-educated European with the curiosity to take an informed interest in his surroundings.' - Asian Affairs

"Screech's choice of illustrations demonstrates his intimate knowledge of source materials in Japan...Because they [Japan Extolled and Decried and Secret Memoirs of the Shoguns] focus on different topics and ways of interacting with Japan, both books should be read together...Neither book alone will be sufficent for carrying out research on Thunberg or Titsingh, but thanks to the expertise of the editor, those doing such research will want to read both books. After many years of nerve-racking critical editing, I found Screech's presentation most refreshing and educating. These books will deserve a place on our shelves." - Itinerario, 30:3 (2006)

'Professor Screech has performed a valuable service for students of Tokugawa Japan and of contacts between the West and Japan by resurrecting Titsingh's writings from obscurity.' - The Japan Society

Introduction 1. Secret Memoirs of the Shoguns Introduction: Before the Tokugawa 2. Essays on Japanese Civilisation On Legal Suicide On Japanese Poetry The Character of the Japanese People 3. Historical Observations Secret Diary of Issac Titsingh Titsingh's Philosophical Discourse