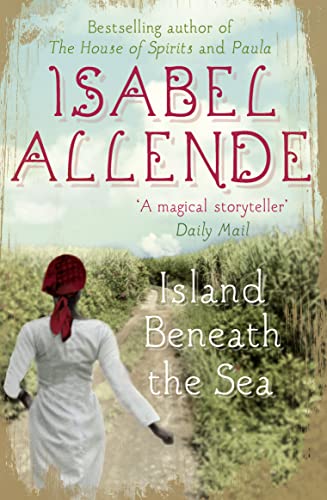 Island Beneath the Sea
by Isabel Allende

From the sugar plantations of Saint-Domingue to the lavish parlors of New Orleans at the turn of the 19th century, Isabel Allende's latest novel tells the story of a mulatta woman, a slave and concubine, determined to take control of her own destiny in a society where that would seem impossible.

Island Beneath the Sea Summary

Island Beneath the Sea by Isabel Allende

From the sugar plantations of Saint-Domingue to the lavish parlors of New Orleans at the turn of the 19th century, Isabel Allende's latest novel tells the story of a mulatta woman, a slave and concubine, determined to take control of her own destiny in a society where that would seem impossible.

Born a slave on the island of Saint-Domingue - now known as Haiti -Tete is the product of violent union between an African mother she never knew and one of the white sailors who brought her into bondage.

When twenty-year-old Toulouse Valmorain arrives on the island in 1770, it's with powdered wigs in his trunks and dreams of financial success in his mind. But running his father's plantation, Saint Lazare, is neither glamorous nor easy.

Against the merciless backdrop of sugar cane fields, the lives of Tete and Valmorain grow ever more intertwined. When bloody revolution arrives at the gates of Saint Lazare, they flee the island for the decadence and opportunity of New Orleans. There, Tete finally forges a new life - but her connection to Valmorain is deeper than anyone knows and not so easily severed.

Spanning four decades, `Island Beneath the Sea' is the moving story of one woman's determination to find love amid loss, to offer humanity though her own has been so battered, and to forge her own identity in the cruellest of circumstances.

Island Beneath the Sea Reviews

'"Island Beneath the Sea" is a seductive, intoxicating saga. It starts with slavery, forbidden relationships and rebellion in Haiti, and expands to include struggles over secret children, racial castes and family heirs in Louisiana. Isabel Allende's latest novel is sweeping, provocative and impossible to put down' Lawrence Hill, author of `The Book of Negroes'

`A complex and involving saga of human passions and cruelties' TLS

'Allende's writing is so vivid we smell the countryside, hear the sounds, see the bright birds, smell and even taste the soft fruit' The Times

`A truly wonderful piece of storytelling - a novel that pulls the reader into its rich, pungent world, and drives us along, dancing helplessly to the beat of the sorceress Allende's drum' Tablet

`Allende is a brilliant storyteller ... a rich and beautiful read' The Stylist

`Allende adroitly explores the role of the era's free people of color ... Island Benath the Sea is a lush lesson of a moment and place all too relevant today.' USA Today

Isabel Allende was born in 1942, and is the niece of Salvador Allende, who went on to become famous as the elected President of Chile deposed in a CIA-backed coup. Her first novel for adults, `The House of the Spirits', was published in Spanish in 1982, beginning life as a letter to her dying grandfather. It was an international sensation, and ever since her books have been acclaimed and adored in numberless translations worldwide.

GOR003049511
Island Beneath the Sea by Isabel Allende
Isabel Allende
Used - Very Good
Paperback
HarperCollins Publishers
2011-06-01
400
0007348657
9780007348657
N/A
Book picture is for illustrative purposes only, actual binding, cover or edition may vary.
This is a used book - there is no escaping the fact it has been read by someone else and it will show signs of wear and previous use. Overall we expect it to be in very good condition, but if you are not entirely satisfied please get in touch with us.