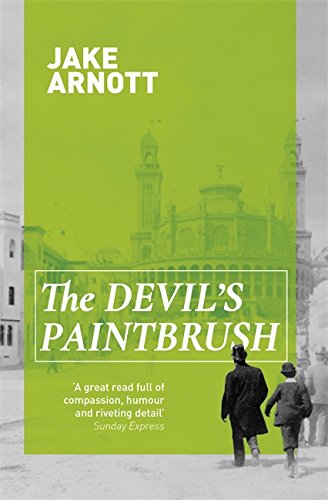 The Devil's Paintbrush
by Jake Arnott

In Stock
$10.49
+10% GST
A fascinating, unusual and seductive historical novel by the bestselling author of The Long Firm.
Very Good
Only 3 left

The Devil's Paintbrush by Jake Arnott

A fascinating, unusual and seductive historical novel by the bestselling author of The Long Firm.

In a Parisian restaurant, Aleister Crowley, the notorious occultist, chances on Major-General Sir Hector Macdonald: once one of the greatest heroes of the British Empire, now facing ruin in a shocking scandal - and vulnerable to Crowley's curious offer of help. An extraordinary night of transgression and revelation ensues . . .

Probing beneath the surface of Victorian conformity, this is an enthralling tale of imperialism, sexuality and the nature of belief, which captures a world on the brink of a brutal new era.

Brilliantly expansive and original * Daily Mirror *
A consummate performance...a virtuoso work of near history, with the occasional in-joke thrown in for good measure...immensely enjoyable * Guardian *
One of the many pleasures of this skilful book is the maintenance of suspense...Arnott does not ask us to choose between [Crowley and Macdonald] - but much of the moral force of this excellent book lies in his demonstration that there is, nonetheless, a choice to be made. * Independent *
A great read, full of compassion, humour and riveting detail. * Sunday Express *
Arnott's great leap forward...Macdonald's predicament is sympathetically examined and Crowley's monstrous drive is brilliantly rendered...it is his best [novel] * The Herald *
Arnott is clearly having fun here...So to combine that with how the necessity to be good - to be a hero - can be as suffocating a pressure as battling with occultist demons makes The Devil's Paintbrush a fine book * Metro *

GOR001640637
The Devil's Paintbrush by Jake Arnott
Jake Arnott
Used - Very Good
Paperback
Hodder & Stoughton General Division
2010-02-04
304
0340922710
9780340922712
N/A
Book picture is for illustrative purposes only, actual binding, cover or edition may vary.
This is a used book - there is no escaping the fact it has been read by someone else and it will show signs of wear and previous use. Overall we expect it to be in very good condition, but if you are not entirely satisfied please get in touch with us.