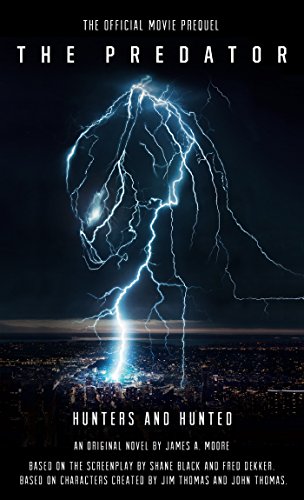 Predator
by James A. Moore

For centuries Earth has been visited by warlike creatures that stalk mankind's finest warriors. Their goals unknown, these deadly hunters kill their prey and depart as invisibly as they arrived, leaving no trace other than a trail of bodies. When Roger Elliott faced such a creature during the Vietnam War, he didn't expect to survive. Nor did he expect that, decades later, he would train the Reavers-a clandestine strike force attached to Project Stargazer. Their mission: to capture one of the creatures, thus proving its existence, disassembling its tech, and balancing the odds between the HUNTERS AND HUNTED

"a potent opening act to set the stage for September's highly anticipated feature while also expanding the canon in gruesome detail" SyFy.com

"an amazing prequel novelization...I would, without hesitation, recommend" The Qwillery

"If you are a Predator fan, nab this book. Regardless of the new movie that just hit theaters...The Predator: Hunters and Hunted movie prequel novel by James A. Moore is a force in its own right." - Movie Nooz

About James A. Moore

JAMES A. MOORE is the bestselling author of more than forty novels including Alien: Sea of Sorrows, Fireworks, Under The Overtree, Blood Red, the Serenity Falls trilogy, City of Wonders, and The Last Sacrifice. A contributor to Aliens: Bug Hunt, he has twice been nominated for the Bram Stoker Award and spent three years as an officer in the Horror Writers Association, first as secretary and later as vice president.

GOR009687375
Predator: Hunters and Hunted Official Movie Prequel by James A. Moore
James A. Moore
Used - Very Good
Paperback
Titan Books Ltd
2018-07-01
320
1785654268
9781785654268
N/A
Book picture is for illustrative purposes only, actual binding, cover or edition may vary.
This is a used book - there is no escaping the fact it has been read by someone else and it will show signs of wear and previous use. Overall we expect it to be in very good condition, but if you are not entirely satisfied please get in touch with us.