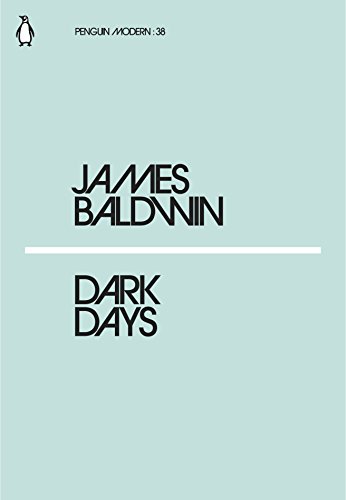 'So the club rose, the blood came down, and his bitterness and his anguish and his guilt were compounded'

Drawing on Baldwin's own experiences of prejudice in an America violently divided by race, these searing essays - Dark Days, The Price of the Ticket and The White Man's Guilt - blend the intensely personal with the political to envisage a better world.

Born in Harlem in 1924, James Baldwin was a novelist, essayist, play wright, poet, social critic, and the author of more than twenty books. His first novel, Go Tell It on the Mountain, appeared in 1953 to excellent reviews, and his essay col lection The Fire Next Time was a bestseller that made him an influential figure in the civil rights movement. Baldwin spent many years in France, where he moved to escape the racism and homophobia of the United States. He died in 1987.

GOR009149462
Dark Days by James Baldwin
James Baldwin
Penguin Modern
Used - Very Good
Paperback
Penguin Books Ltd
2018-02-22
64
0241337542
9780241337547
N/A
Book picture is for illustrative purposes only, actual binding, cover or edition may vary.
This is a used book - there is no escaping the fact it has been read by someone else and it will show signs of wear and previous use. Overall we expect it to be in very good condition, but if you are not entirely satisfied please get in touch with us.