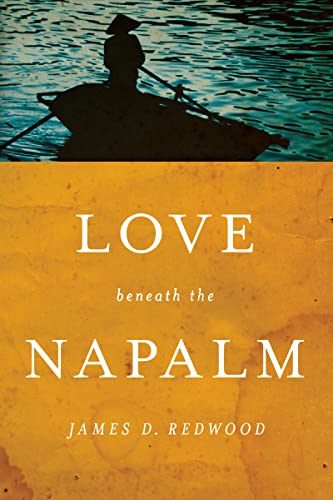 Love beneath the Napalm by James D. Redwood

Love beneath the Napalm by James D. Redwood

Love beneath the Napalm is James D. Redwood's collection of deeply affecting stories about the enduring effects of colonialism and the Vietnamese War over the course of a century on the Vietnamese and the American and French foreigners who became inextricably connected with their fate. These finely etched, powerful tales span a wide array of settings, from the former imperial capital of Hue at the end of the Nguyen Dynasty, to Hanoi after the American pullout from Vietnam, the Chinese invasion of Vietnam in 1979, contemporary San Francisco, and Schenectady, New York.

Redwood reveals the inner lives of the Vietnamese characters and also shows how others appear through their eyes. Some of the images and characters in Love beneath the Napalm-the look that Mr. Tu's burned and scarred face always inflicts on strangers in the title story; attorney and American Vietnam War-veteran Carlton Griswold's complicated relationship with Mary Thuy in The Summer Associate; Phan Van Toan's grief and desire, caught between two worlds in The Stamp Collector-provide a haunting, vivid portrayal of lives uprooted by conflict. Throughout, readers will find moments that cut to the quick, exposing human resilience, sorrow, joy, and the traumatic impact of war on all those who are swept up in it.

In his collection Love beneath the Napalm, James Redwood chronicles the choices made by those who survived the Vietnam War and their ensuing consequences. These stories, unusual and unexpected, recount how characters shape and construct their intimate and social landscapes in the wake of conflict. These are important stories that explore a time that is receding into historical memory. Redwood is an astute writer, and these stories are an impressive debut. -- Sharon Dilworth, author of Year of the Ginkgo
James D. Redwood is a professor of law at Albany Law School.
NLS9780268040345
9780268040345
0268040346
Love beneath the Napalm by James D. Redwood
James D. Redwood
Notre Dame Review Book Prize
New
Paperback
University of Notre Dame Press
20130825
200
N/A
Book picture is for illustrative purposes only, actual binding, cover or edition may vary.
This is a new book - be the first to read this copy. With untouched pages and a perfect binding, your brand new copy is ready to be opened for the first time
Trustpilot