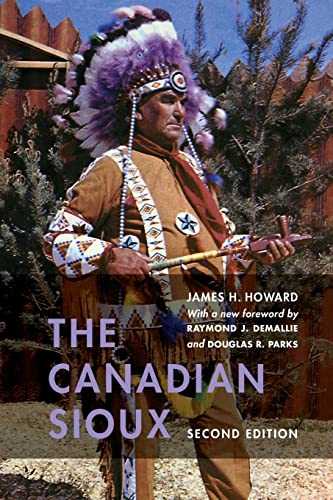 Used Price
$45.99
inc. GST
Free Shipping in Australia
The Canadian Sioux are descendants of Santees, Yanktonais, and Tetons from the United States who sought refuge in Canada during the 1860s and 1870s. This book helps fill that gap in the literature and remains relevant even in the twenty-first century.
Reviews:
Trustpilot
Very Good

The Canadian Sioux are descendants of Santees, Yanktonais, and Tetons from the United States who sought refuge in Canada during the 1860s and 1870s. Living today on eight reserves in Manitoba and Saskatchewan, they are the least studied of all the Sioux groups. This book, originally published in 1984, helps fill that gap in the literature and remains relevant even in the twenty-first century.

Based on Howard's fieldwork in the 1970s and supplemented by written sources, The Canadian Sioux, Second Edition descriptively reconstructs their traditional culture, many aspects of which are still practiced or remembered by Canadian Sioux although long forgotten by their relatives in the United States. Rich in detail, it presents an abundance of information on topics such as tribal divisions, documented history and traditional history, warfare, economy, social life, philosophy and religion, and ceremonialism. Nearly half the book is devoted to Canadian Sioux religion and describes such ceremonies as the Vision Quest, the Medicine Feast, the Medicine Dance, the Sun Dance, warrior society dances, and the Ghost Dance.

This second edition includes previously unpublished images, many of them photographed by Howard, and some of his original drawings.

"Howard has written a very good book, which demonstrates that the Canadian Sioux have retained some traditions that their relatives in the United States have abandoned. The Canadian Sioux is recommended reading to students of Sioux traditions."-Minnesota History Magazine

James H. Howard (1925-82) was a professor of anthropology at Oklahoma State University. His many publications include The Warrior Who Killed Custer: The Personal Narrative of Chief Joseph White Bull and Shawnee: The Ceremonialism of a Native American Tribe and Its Cultural Background.

Raymond J. DeMallie is Chancellor's Professor of Anthropology and American Studies, codirector of the American Indian Studies Research Institute, and curator of North American Ethnology at the Mathers Museum of World Cultures at Indiana University.

Douglas R. Parks is a professor of anthropology and codirector of the American Indian Studies Research Institute at Indiana University, and editor of the journal Anthropological Linguistics.

GOR010865282
The Canadian Sioux by James H. Howard
James H. Howard
Studies in the Anthropology of North American Indians
Used - Very Good
Paperback
University of Nebraska Press
2014-04-30
226
080327176X
9780803271760
N/A
Book picture is for illustrative purposes only, actual binding, cover or edition may vary.
This is a used book - there is no escaping the fact it has been read by someone else and it will show signs of wear and previous use. Overall we expect it to be in very good condition, but if you are not entirely satisfied please get in touch with us.