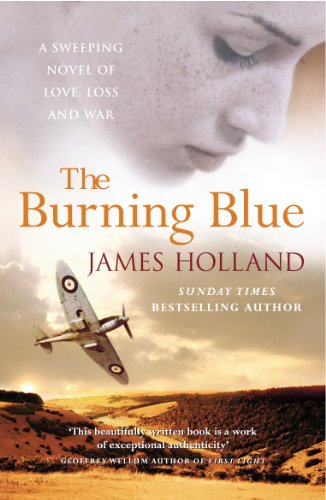 The Burning Blue
by James Holland

In Stock
$12.99
inc. GST
Joss Lambert has always been a loner, constrained by a secret from his past, until he finds friendship and solace firstly with Guy Liddell, a friend from school, and then with Guy's family, who welcome him into their farmhouse home.
Very Good Good
8 in stock

The Burning Blue by James Holland

Joss Lambert has always been a loner, constrained by a secret from his past, until he finds friendship and solace firstly with Guy Liddell, a friend from school, and then with Guy's family, who welcome him into their farmhouse home. Joss increasingly comes to depend upon the Liddells and treats Alvesdon Farm as the one place where he feels not only appreciated but also truly happy. But in late 1930s England, the idyll cannot last. With war looming, Joss is forced to confront the past. He escapes through flying, becoming a fighter pilot in the RAF. But with the onset of war, even the Liddells' world is crumbling. As Joss is fighting for his life in the Battle of Britain, so he begins to fall madly in love with Stella - Guy's twin - but with tragic consequences. Leaving England and the Liddells far behind, he continues to fly amid the sand and heat of North Africa's deserts, flying above the 'Desert Rats' of the 8th Army, until his hopes and dreams are seemingly shattered for good...

"This beautifully written book is a work of exceptional authenticity. The descriptions of life in the late 1930s and the intensity of the air battles revive many recollections and make for compelling reading." -- Geoffrey Wellum, former Battle of Britain pilot and author of First Light
"Full of wartime atmosphere. Once again I could see the vapour trails, hear the Spitfire engines and the lofty crackle of machine guns" -- Leslie Thomas, author of Waiting for the Day
"The ear-popping action sequences are tremendously exciting ... the pastoral scenes reveal a deep and genuine love of the countryside and its age-old traditions. Holland leaves one in no doubt what ordinary British folk were fighting for" * Sunday Telegraph *
"There can seldom have been a better, nor more detailed, evocation of exactly what it was like to fly - and die - in the clear blue skies above the English Channel in those heady days in the summer and autumn of 1940" * Daily Mail *
"He has joined the few who can bring history to life" * Guardian *

GOR000737705
The Burning Blue by James Holland
James Holland
Used - Very Good
Paperback
Cornerstone
2004-06-17
544
0099436477
9780099436478
N/A
Book picture is for illustrative purposes only, actual binding, cover or edition may vary.
This is a used book - there is no escaping the fact it has been read by someone else and it will show signs of wear and previous use. Overall we expect it to be in very good condition, but if you are not entirely satisfied please get in touch with us.