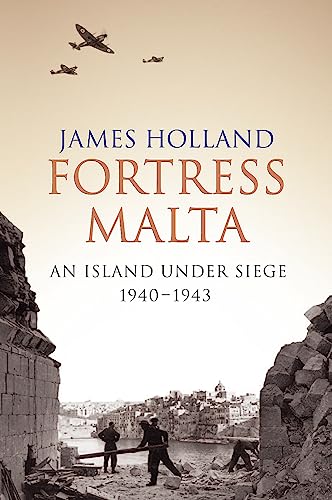 In Stock
$17.49
inc. GST
The extraordinary drama of Malta's WWII victory against impossible odds told through the eyes of the people who were there.
Like New Very Good Good Well Read
Only 2 left

Fortress Malta: An Island Under Siege 1940-1943 by James Holland

The extraordinary drama of Malta's WWII victory against impossible odds told through the eyes of the people who were there.

In March and April 1942, more explosives were dropped on the tiny Mediterranean island of Malta - smaller than the Isle of Wight - than on the whole of Britain during the first year of the Blitz. Malta had become one of the most strategically important places in the world. From there, the Allies could attack Axis supply lines to North Africa; without it, Rommel would be able to march unchecked into Egypt, Suez and the Middle East. For the Allies this would have been catastrophic. As Churchill said, Malta had to be held 'at all costs'.

FORTRESS MALTA follows the story through the eyes of those who were there: young men such as twenty-year-old fighter pilot Raoul Daddo-Langlois, anti-aircraft gunner Ken Griffiths, American Art Roscoe and submariner Tubby Crawford - who served on the most successful Allied submarine of the Second World War; cabaret dancer-turned RAF plotter Christina Ratcliffe, and her lover, the brilliant and irrepressible reconnaissance pilot, Adrian Warburton. Their stories and others provide extraordinary first-hand accounts of heroism, resilience, love, and loss, highlighting one of the most remarkable stories of World War II.

'Holland's stirring account pays fitting tribute to the heroism of the island's defenders and its civil population ... the book teems with memorable characters.' MAIL ON SUNDAY

James Holland studied history at Durham University. He writes articles and reviews for Daily Telegraph, Sunday Times, The Times, Sunday Express and New Statesman on twentieth Century social history and the second world war. He has also worked in the publicity departments for major publishing houses most recently responsible for the publicity on Anthony Beever's number one bestseller 'Berlin'.

GOR007687233
Fortress Malta: An Island Under Siege 1940-1943 by James Holland
James Holland
Cassell Military Paperbacks
Used - Like New
Paperback
Orion Publishing Co
2004-04-01
512
0304366544
9780304366545
N/A
Book picture is for illustrative purposes only, actual binding, cover or edition may vary.
This is a used book - there is no escaping the fact it has been read by someone else and it will show signs of wear and previous use. Overall we expect it to be in very good condition, but if you are not entirely satisfied please get in touch with us.