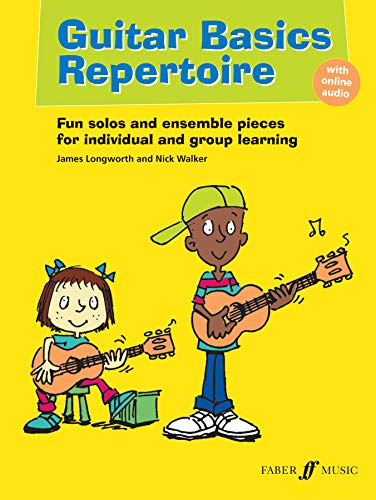 Used Price
$17.49
inc. GST
Free Shipping in Australia
Containing over forty pieces, Guitar Basics Repertoire offers a rich and varied mixture of folksongs from around the world, classical tunes and popular film music, alongside evocative originals. Designed both to consolidate the areas of study covered in Guitar Basics and present new topics in the fun but clear style of the popular method book.
Reviews:
Trustpilot
Very Good

Designed both to consolidate the areas of study covered in Guitar Basics and present new topics in the fun but clear style of the popular method book, Guitar Basics Repertoire introduces accidentals, moving up the neck, two part music, arpeggios and plucked chords, as well as fun extended techniques that even a beginner can master. Guitar Basics Repertoire contains both solo and ensemble pieces, backing tracks for many of which are available below, and is the perfect companion to Guitar Basics whether being used for group teaching or to prepare students for graded examinations.

Both solo and ensemble repertoire is included, with backing tracks and teachers' part for many pieces provided on the accompanying ECD.

An accompaniment to the Guitar Basics book, this little gem contains over 40 pieces that underline the work covered in the first book - all in the same fun, clear style.

GOR005798976
Guitar Basics Repertoire by James Longworth
James Longworth
Guitar Basics
Used - Very Good
Hardback
Faber Music Ltd
2012-07-18
32
0571536875
9780571536870
N/A
Book picture is for illustrative purposes only, actual binding, cover or edition may vary.
This is a used book - there is no escaping the fact it has been read by someone else and it will show signs of wear and previous use. Overall we expect it to be in very good condition, but if you are not entirely satisfied please get in touch with us.