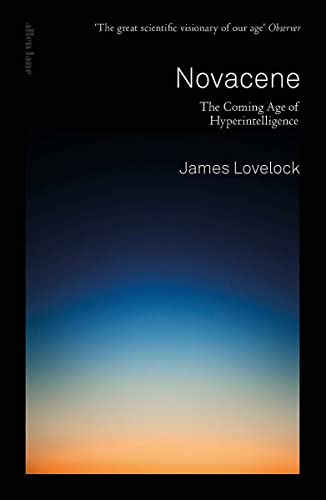 Novacene: The Coming Age of Hyperintelligence by James Lovelock

James Lovelock, creator of the Gaia hypothesis and the greatest environmental thinker of our time, has produced an astounding new theory about future of life on Earth. He argues that the anthropocene - the age in which humans acquired planetary-scale technologies - is, after 300 years, coming to an end. A new age - the novacene - has already begun.

New beings will emerge from existing artificial intelligence systems. They will think 10,000 times faster than we do and they will regard us as we now regard plants - as desperately slow acting and thinking creatures. But this will not be the cruel, violent machine takeover of the planet imagined by sci-fi writers and film-makers. These hyper-intelligent beings will be as dependent on the health of the planet as we are. They will need the planetary cooling system of Gaia to defend them from the increasing heat of the sun as much as we do. And Gaia depends on organic life. We will be partners in this project.

It is crucial, Lovelock argues, that the intelligence of Earth survives and prospers. He does not think there are intelligent aliens, so we are the only beings capable of understanding the cosmos. Maybe, he speculates, the novacene could even be the beginning of a process that will finally lead to intelligence suffusing the entire cosmos. At the age 100, James Lovelock has produced the most important and compelling work of his life.

The hard science is explained with beautiful clarity, and a characteristic mischievous wit ... It is a bracing corrective -- Steven Poole * Guardian *
This restlessly thoughtful and forward-looking book ... is partly a defence of a lifetime's ideas, but mostly an argument about how AI is soon to overtake us - and what that means for our species -- James McConnachie * The Times *
Leavened with wit and optimism ... Novacene is the collected wisdom of an elder of our tribe which more than repays the short time it takes to read. -- Stephen Cave * Financial Times *
Novacene reads like undiluted Lovelock. From the start of his writing life - no matter how tortuous the narrative or complex the argument - Lovelock has written persuasively. ... if you want a sense of hyperintelligence in bipedal form, Novacene is a good place to start. -- Tim Radford * Nature *

James Lovelock, who was elected a Fellow of the Royal Society in 1974, is the author of more than 200 scientific papers and the originator of the Gaia Hypothesis (now Gaia Theory). His many books on the subject include Gaia: A New Look at Life on Earth (1979), The Revenge of Gaia (2006), The Vanishing Face of Gaia (2009) and A Rough Ride to the Future (2014). In 2003 he was made a Companion of Honour and in 2005 Prospect magazine named him one of the world's top 100 public intellectuals, and in 2006 he received the Wollaston Medal, the highest Award of the UK Geological Society.

GOR009876108
Novacene: The Coming Age of Hyperintelligence by James Lovelock
James Lovelock
Used - Very Good
Hardback
Penguin Books Ltd
2019-07-04
160
024139936X
9780241399361
N/A
Book picture is for illustrative purposes only, actual binding, cover or edition may vary.
This is a used book - there is no escaping the fact it has been read by someone else and it will show signs of wear and previous use. Overall we expect it to be in very good condition, but if you are not entirely satisfied please get in touch with us.